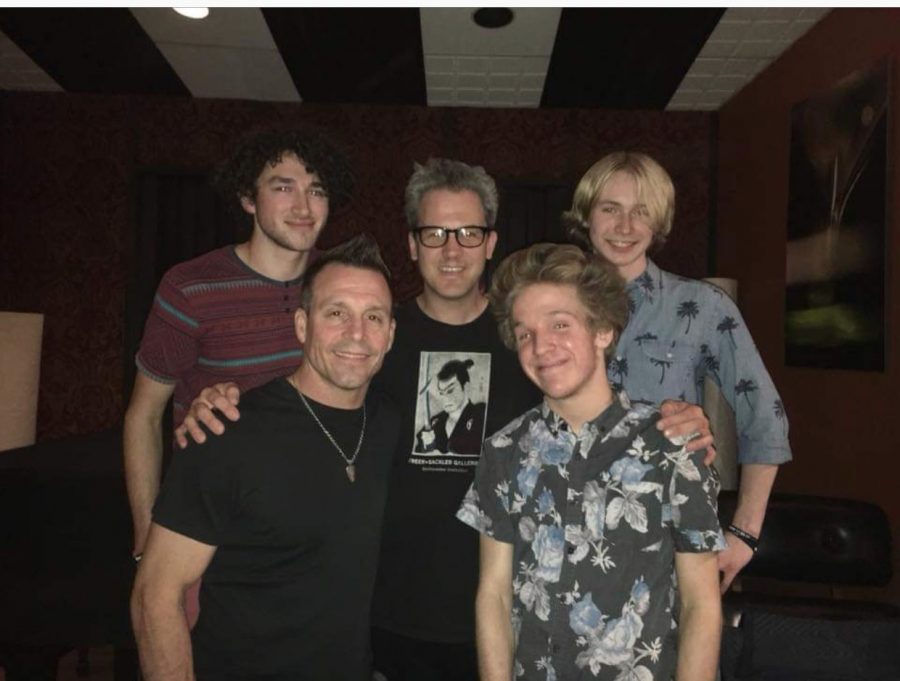 Siren poses for a picture with their sound guy as they get ready to record for their new album, “The Boys.” Photo courtesy of Deputy Curtis.

Deputy Steven Curtis, RHS’s school police liaison, left his home in New York to come to the Rochester area, hoping to leave an impact on the RHS community. Deputy Curtis decided to spark a change by forming a student band with some of the students from RHS, who graduated in 2018.  Deputy Curtis answered a few questions to provide insight on what it took to establish their band, Siren, and what his goals are for the group’s future.

Talon: What is the name of your student band and who do you perform with?

Deputy Curtis: “The band is called Siren. We came up with that concept because I’m a police officer. It took a while. There are two students from Rochester High School – last year they graduated. One student’s name is Evan Miller and the other is Sean Donnelly.”

Talon: What is your role and the roles of the other students in your band?

Deputy Curtis: “Evan played the lead guitar. Sean Donnelly played the bass guitar. Another student from Adams High School named Kyle Garland was our drummer… I am the lead singer.”

Talon: What prompted you to form a student band with some of the students from RHS?

Deputy  Curtis: “One of the reasons I got this job as a school police officer was to keep that image positive and to stay positive in all aspects- law enforcement and also helping out kids and making better choices. I was approached in the lunchroom last year and we started talking about just police officers in general and that student made a profound comment about ‘How do I maintain my sanity as a cop when I’m hated so much on the streets?’ And it just blurted out that I said ‘Well, I like to stand tall about what I believe in.’ … I said, ‘I‘ll tell you what I’m going to do. I’m going to write a song called “Standin’ Tall.” I’ll write it, I’ll put the melody to it and the verses and chorus to it, and I’m going to find someone that knows how to perform this with me.’ I found Evan Miller.”

Talon: Do you think your band leaves a significant impact on other students in the district? Why or why not?

Deputy Curtis: “Anybody that has seen us before, people that listen to the songs like ‘Swansong’ that I wrote and ‘Standin’ Tall,’ ‘Tell the Queen,’ … we get very positive feedback from them. They do identify with the lyrics, and the beat and the melody. So, yeah, it’s pretty cool.”

Talon: What advice would you give for students aspiring to form their own groups, whether it be a band, a club, or a team of some sort?

Deputy Curtis: “Just get out there, throw everything on the table. Throw it all – whatever your talents are, if it’s guitar, harmonies, whatever it is – bring it all to the table … I say just be original. Be original. If you’re going to write music, coming from an old classic kind of guy like me, it has to mean something to YOU before it’s going to mean something to somebody else. So make sure what you are writing on paper accounts for you – that you are trying to reach a certain audience with your words.”

*This interview has been condensed for clarity.