Do you believe in ghosts? 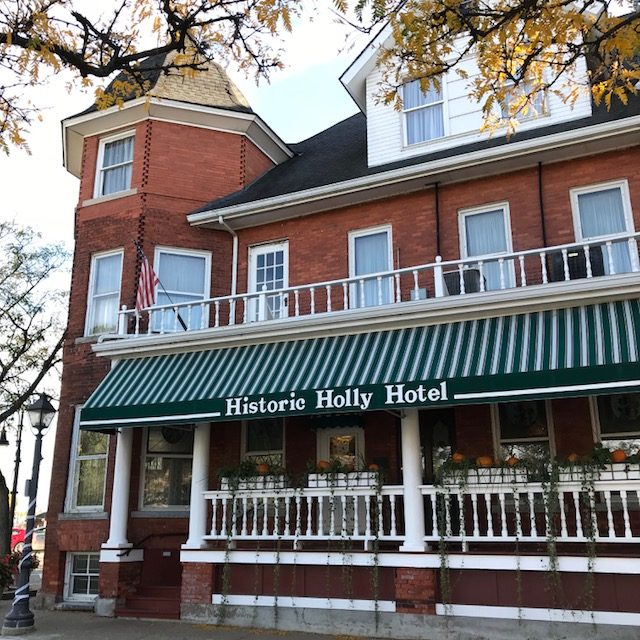 A photo of the Holly Hotel building in Downtown Holly, Michigan. Photo by Violet Resh.

At the end of a cobblestone walkway in Downtown Holly stands the historic Holly Hotel, looking like a postcard among the antique shops and charming boutiques. The area used to be a popular destination on the railroads in the 1860s, but has simmered down since then to become a quaint little town full of history.

The former hotel and current restaurant is three stories tall, with red bricks and a classic porch. The winding hallways and lavish rooms each have their own ambiance.

“The Holly Hotel is a really cool place where when you go there to eat you travel back in time,” said freshman Evie Ansari. “There’s one room from a train where you can eat and pretend you’re actually on an old train.”

The interior looks as if it hasn’t been touched since the early 1900s, but that actually is not the case. According to the Holly Hotel website, the hotel burned down in January 1913, but was rebuilt very closely to the original structure. Exactly  sixty-five years later at the exact same hour, the hotel burned once again in 1978, and an extensive renovation took place afterward, heavily referencing the hotel in the 1890s.

The extensive history and strange sequence of events has caused some to believe the building serves as a home for many spirits who had a strong connection to it. Guests and workers alike say they have witnessed paranormal circumstances.

“My family and I have been there a few times and we have gone around taking pictures to find ghosts,” said Ansari. “There was one time we were there and a server took our picture and they told us a story about how one time someone had taken a picture there and in the picture a girl was in the mirror looking at the camera.”

The spirits of the Holly Hotel have managed to be identified due to characteristics of their presence. For example, according to the Holly Hotel website, it is common that people smell cigar smoke, although the building has a no smoking policy. It is suspected that this indicates that the spirit of Mr. Hirst, the first owner of the building, is nearby, since he was a very heavy smoker.

Other reports have mentioned disembodied voices, such as laughter or singing, and strange shadows or lights in photos taken around the building. Some people have even claimed to have seen ghostly materializations of faded figures in time period clothing.

“Whenever I go, we look for ghosts due to the hotel’s reputation,” said Ansari, “It’s a fun adventure you could go on, looking for ghosts and eating in a place that’s hundreds of years old.”