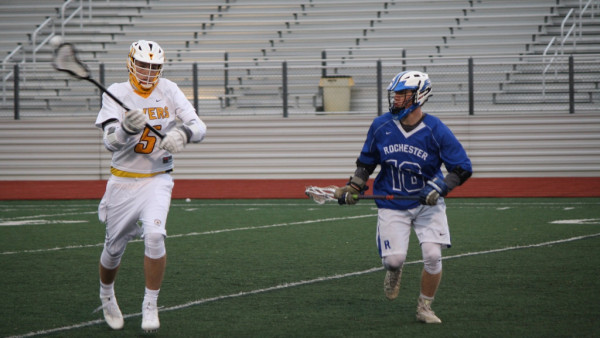 The boys Rochester Varsity Lacrosse team kicks off their season with their first win during their second game, beating Lapeer High School 13-11. The boys Lacrosse program has been setting goals for their team that they would like to achieve by the end of their season. Coach Nick Facca has been the head coach for Varsity at Rochester for four seasons and has also coached at other schools. He played for 10 years before he began coaching and is extremely experienced with the game. He explains the goals  his team has set for this season.

“We want to finish over .500 as that is something our program has never done before,” Coach Facca said. “Additionally, we want to compete for our conference championship, and beat our in-city rivals.”

Junior Jackson Stewart is participating in his first year on the varsity team, playing defense. He talks about some of the advantages this year on the team.

“Our biggest advantage this year is having some great leadership,” Stewart said. “Many of my teammates have taken the time to teach me stuff and take me under their wing because I’m a brand new lacrosse player.”

Senior Michael Williamson has been in the RHS Lacrosse program for four years and states some of the weaknesses their team has this year.

“We need to improve our communication as a team during games, being loud and calling things out is a really important part of lacrosse,” Williamson said. “We seem to quiet down in games compared to when we’re in practice.”

The boys are getting ready to try to achieve their many goals and Coach Facca is trying to prepare them to do that.

“We practice for two hours every day. My assistant coach and I develop a practice plan earlier in the day where we will generate drills with a focus for the day,” Coach Facca said. “Sometimes that is passing and catching, defense or offense. In addition to practice, we weight lift twice a week, typically one day before school and Friday’s after school. The program we use for weight lifting is developed with Coach Merlo.”