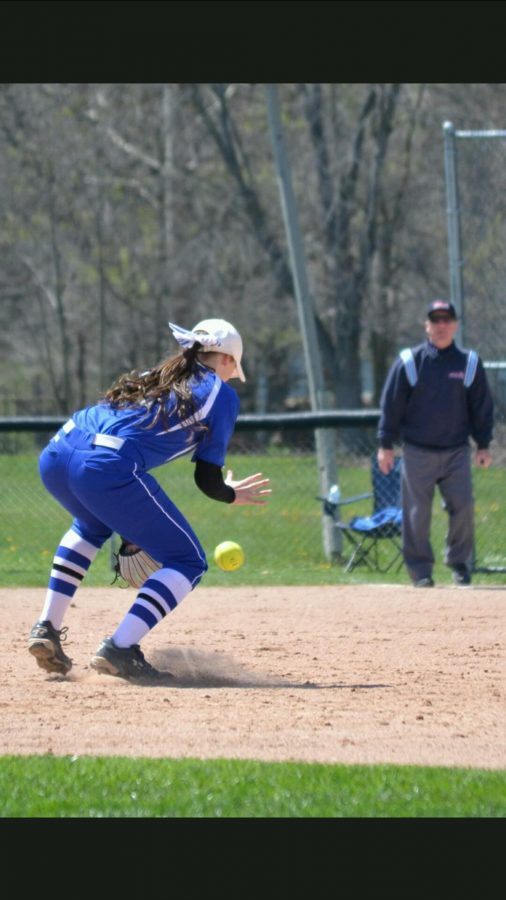 While acceptance letters are rolling in for many seniors, a few athletes are already committed to playing for some colleges, and have been since as early as last spring. Seniors Maddie Halsey, Rose Myers, Demetri Pliakos and Brooke Busse have been recruited and committed to play at the college level for volleyball, softball, soccer and golf, respectively.

Myers has committed to Wayne State University and is looking to go into nursing.

“I have been interested in Wayne State’s softball program for a while, since at least freshman year,” Myers said. “My high school coach actually played there, so she helped me get into contact with the coaches and also help follow my career path, because they’re really good for medical and nursing.”

Aside from RHS athletics, Myers is also plays on a travel softball team during the summer, fall, and winter. Myers comments on how her experience at RHS specifically helped her become the player she is.

“The softball program at Rochester has helped me step up and become a leader and help everyone around me succeed and to become better myself so I can help out my team,” Myers said.

Head Softball Coach Laura Guzman has helped Myers through the process of getting recruited and is confident in her ability to succeed at the college level.

“Rose knows what it takes to play at the next level,” Ms. Guzman said. “She’s worked hard her whole life and plays year around committing herself to get better day in and day out. I have no doubt that Rose will go in as a freshman and compete for a starting spot.”

Ms. Guzman comments on how Myers leads her team to success through her positive influence.

“Rose sets the tone for our softball program. A lot of things we achieve can be contributed to her success on the field. She is a tremendous leader and captain. The girls see how she plays the game and that is contagious for other girls to compete at a higher level.”

Both Ms. Guzman and Myers agree that grades are the key to success when looking to get recruited to college athletics, as more colleges will be interested in recruiting.

“Never quit and stop believing in your abilities,” Ms. Guzman said. “Know and understand your true talent and have real expectations of where you see yourself playing. But you cannot do any of this if you do not have the grades and test scores academically. Being a student-athlete, student comes first, and some forget that.”

Halsey has committed to play volleyball at the University of Tennessee at Chattanooga, where she is looking to study either business or advertising.

“When I went on my visit there, I just got a feeling that I hadn’t gotten from any of the other places I visited,” Halsey said. “The area’s super pretty, there’s a lot of adventurous things to do, it’s kinda just me in a place.”

Like Myers, Halsey agrees that RHS has helped her become a leader, on and off the court.

“Rochester has helped me become the athlete that I am by making me really have to step up and be the leader I have become,” Halsey said. “Because I play with different ages here, it’s really helped me to branch out and become part of everyone’s experience.”

Being a part of teams outside of RHS athletics, going to clinics and camps is a common trend among student-athletes who get scouted and recruited to play for college teams. Head volleyball coach Lauren “Doogie” Duquette comments on how rare it is to see her players get recruited.

“You don’t really get recruited through high school volleyball at all nowadays,” Doogie said. “If you don’t play travel volleyball at a high level, you simply won’t get seen, and we don’t have a ton of girls that play club volleyball here.”

Doogie has helped Halsey through the recruiting process as well as eventually settling on which college to pick.

“My biggest fear was that her head would get lost in a big name school and that she wouldn’t get out of it that she was hoping for,” Doogie said. “More than anything, it was a conversation about what she wanted and how to find that.”

Halsey and Doogie, like Myers and Guzman, agree that hard work, ambition and persistence will lead student-athletes to the success they desire.

“Put in the work,” Doogie said. “If you have a dream, don’t be afraid to fail. Don’t stop pushing for a college offer because you think you can’t do it. You really don’t know until you try, and dream big.”