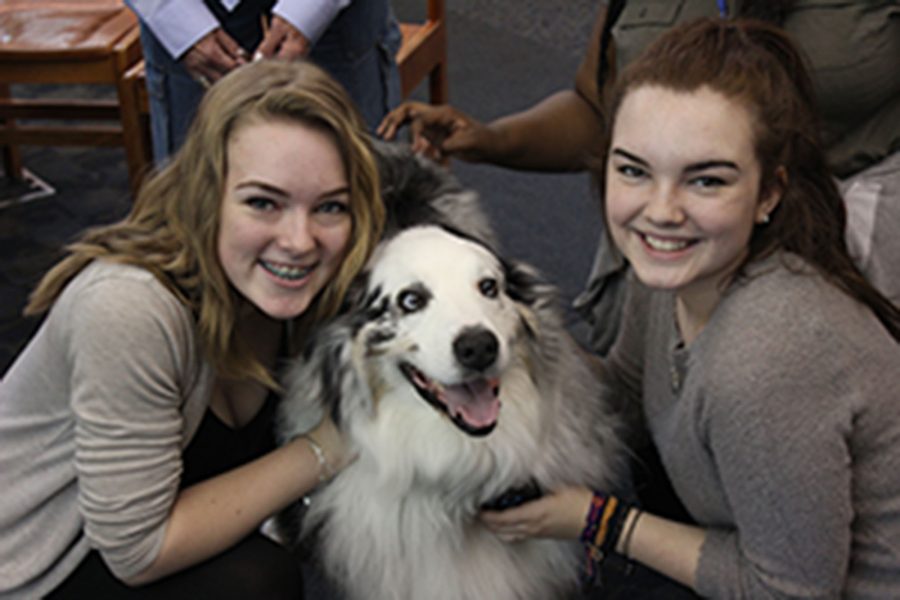 It’s an unusual Thursday morning when a pack of dogs, breeds of many kinds, make their way down the steps, trotting towards the Media Center for a lunch-long event that is sure to interest students and faculty alike. The event, titled “Take a Paws,” was organized in hopes of bringing relaxing pet therapy to those stressing for their upcoming AP tests and exams. The event was held May 5, and will occur again on June 9.

“Take a Paws” came together after a quick suggestion from a student became a reality. Sophomore Brittney Evered decided to bring up the idea of bringing therapy dogs to Rochester to English teacher Mrs. Jennifer Schrems.

“I had seen several other high schools, middle schools and colleges adopt the idea,” Evered said. “It seemed like an amazing way to bring kids together to reduce all of the stress from AP tests or just school in general.”

The opportunity to hold this event was not attainable with the snap of a finger, but took a bit of planning ahead, as Mrs. Schrems elaborates on the process.

“I’ve know people in the past, friends and family, who have benefitted from therapy dogs, so I thought it would be a really beneficial thing to do at Rochester High, and something unique that we’ve never done before,” Mrs. Schrems said. “So I basically said to [Brittney]: ‘Ok, I’ll try to get it approved, and then go from there.’ So I asked [principal] Mr. [Neil] DeLuca what he thought of the idea and he said as long as the dogs were trained, which they were, from a trained organization, that we could do it.”

After the approval was set in stone, the right organization was sought out for the event. After some research, “Pet-a-Pet” was chosen for the job.

“Once the idea started snowballing, I looked up different organizations and Mrs. Schrems contacted the owner of Pet-A-Pet, Yeseem, and from there we had many volunteers contact Yeseem about coming to Rochester,” Evered said. “They ask volunteers to come visit the schools and the dogs are usually either in training to become a therapy dogs or they’re licensed!”

The organization was chosen, volunteers had agreed to bring their pets, and students and faculty were lined up out the door to take a break from school stress. Junior Mackenzie Fergerson explains her role, and how she experienced the event herself.

“I was originally planning on only being a spectator but Brittney asked if I wanted to help the day of so that’s how I ended up partly being in charge of the money,” Fergerson said. “Everyone who came to the event enjoyed it, and I only heard good things about it! I believe that having dogs in the school made everyone excited for the school day.”

The dogs weren’t just a fun addition to the school day, but a medically beneficial one as well, as Evered explained the benefits of therapy dogs herself.

“Not only can students play with pups, but they can also lower blood pressure and anxiety, decreases feelings of loneliness, [and] provides comfort,” Evered said. “The organization was made for the sole purpose of being a stress reliever.”

Even though some students may not have thought too hard into the medical advantages, they were happy overall with the result of the event.

“I believe they benefit the mental health of the students,” Furgerson said. “It gives them a chance to take a break from all of the studying and homework to just have a good time with some pups.

Although the event was meant for students with upcoming AP tests, and those who stress about school daily, they weren’t the only ones who enjoyed the presence of the animals.

“[I got] a lot of positive feedback from the students,” Mrs. Schrems said.  “Just like, ‘it was the best day ever,’ and they had certain dogs that they loved…they can’t wait to do it again. [It was] also really nice to see a lot of teachers as well. We did it to benefit the students, but I think it benefitted the teachers as well.”

Since receiving so many positive comments after the fact, Evered and Mrs. Schrems hope to plan another event in upcoming years.

“I would like to see the tradition continue, so my goal would be to continue to do it at least twice a year,” Mrs. Schrems said. “I would do one in January and one in May. Just the idea around exams.”

Along with the positive student response, the volunteers found “Take a Paws” to be just as enjoyable.

“[The pet owners] were really happy as they were leaving,” Mrs. Schrems said. “Many of them said what a great experience it was. There were ten to twelve people, adults with their dogs, that have never stepped foot inside Rochester High before, and to have them walk in and have such a positive impression of the kids, of the staff, of just their whole experience here just really says a lot about Rochester High.”

At the end of the day, students and teachers pet the pets and saw success as “Take a Paws” was a beneficial therapy dog session for everyone.

“Everyone was smiling and happy, the only stressful part about it was leaving,” Evered said. “I don’t think it could have gone better, it was such an amazing experience, I can’t wait to do it again.”