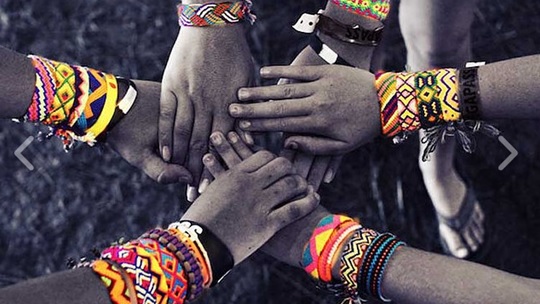 The bracelets that members of Spanish NHS sold helped less fortunate students in Nicaragua. Photo Courtesy of The Pulsera Project

Sophomore Paige Gonterman walks around school trying to sell brightly colored items made by students in Nicaragua. This initiative by Spanish National Honor Society is part of a larger cause called the Pulsera Project.

Senior Alicia Wang echoes the enthusiasm shown by students in buying the bracelets, and thinks part of why people love the bracelets so much is because the tags show how they’re supporting a good cause.

“I know that a lot of people liked them because each one is very unique and intricate,” Wang said. “There’s also a tag on it that says the backstory of the artisan and so that’s really interesting to see.”

“It goes to a really good cause,” Wang said. “It goes back to the artisans who made them and it helps with funding for schools and.It’s satisfying to know that each time you sell one and you see the face you know that it goes back to that face.”

Similarly, Gonterman believes this project was beneficial not only to those in Nicaragua but also those who helped to sell the Pulseras.

“I think the Pulsera Project was really cool especially in raising money to help others,” Gonterman said. “It got the students focusing on others’ needs and how we can help others in the community and  in the world.”

Spanish teacher and SNHS advisor Ms. Kathy Porembiak explains how this relates to their goals.

“We want to promote and support a love for the Spanish language and diverse cultures,” Ms. Porembiak said. “We can do this by raising money and providing support to the people involved. We’ve wanted to do something like this since we started [Spanish NHS] a few years ago.”

The Pulsera Project allows students at RHS to extend their service much farther.

“One of our goals is to help others in the Spanish community, so through this we helped people not only in the community but also in a different country,” Gonterman said.

Students at RHS raised over $1,700 for the Pulsera Project.

“I think it’s been pretty successful,” Gonterman said, “I definitely would do something like this again. It was really popular in the school and it was a great way to help in the world.”