Girls soccer season is heating up 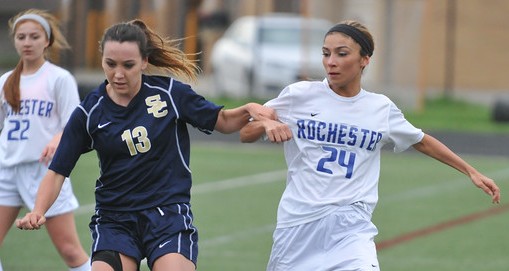 Senior captain Angela Lekosiotis laces up her shoes getting ready for the upcoming game. Knowing that it’s her last season, these last games she plays are very important to her.

“The focus of this season is to win the league and to go far in districts because we have the potential to be really successful this season,” Lekosiotis said.

No matter who you ask what the focus of the team is, there seems to be a common response.

“To get further in districts than last year,” sophomore Tia Stathakios said.

“We need to advance further in districts,” Gilmore said.

Coach Dustin Coleman who is in his second year of coaching the varsity team also possesses the same goal.

“Team’s goal is to win the OAA White,” coach Coleman said. “And to win our District.”

The team is already at a promising start with a 2-1-2 record.

“Our young players are already contributing in all areas of the field,” coach Coleman said. “And we are looking forward to their continual contributions.”

Senior Angela Lekosiotis expands on the presence of young players on the field.

“The young players on our team this year have been taking on a huge role with at least 3 freshman starting each game,” Lekosiotis said. “They have been playing tough positions that hold a lot of responsibility like our two center backs Olivia Greensdale and Jillian Lekosiotis.”

Lekosiotis believes freshman on the team bring something new on the field.

“All of our freshman have been giving a lot of minutes and have given us a new spark on the field,” Lekosiotis said.

With young players on the team, the girl’s soccer team will have a disadvantage because of the fact that they are smaller. Coach Coleman comments on how they combat this issue.

“It is no secret that we are a possession team that play a lot of counter attacking minded teams,” coach Coleman said. “As long as we continue to be patient in possession, capitalize on the chances we create and continue to build our already strong defense we will accomplish our goals.”