Football ends season with a win over Stoney Creek 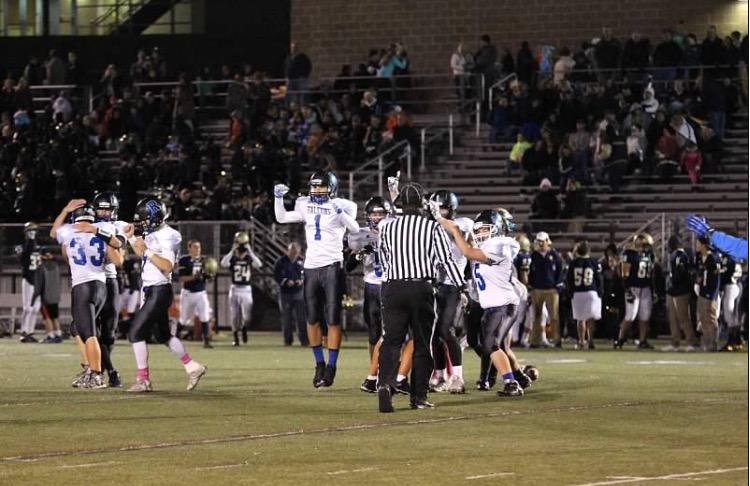 Falcon football players celebrate a touchdown during the game.

Senior Daniel Villalpando, with his team behind him, hustles out onto the Stoney Creek football field, head high, mind ready, and determined for that win. On Friday Oct. 24, the Falcons received their first win of the season against the Stoney Creek Cougars, with a 30-16 victory.

“Winning the football game was a great way to finish off the season,” Villalpando said. “Even though our overall record wasn’t what we wanted, I felt like the last win against a rival school was good for the program, the school, and the student body in general.”

The players knew this was their last chance to leave their mark on the season.

“Our hopes and expectations were to give everything we had left into the game,” senior Alex Grabowski said. “It was important to us to end the season on a high note.”

Football head coach Eric Vernon had high hopes before entering the game as well, preparing for the game just as if it was any other.

“We had the same approach to that week’s game that we had to every other game that we played during the season,” head coach Erik Vernon said. “The players worked extremely hard, just like every other week. We just had a few breaks go our way that we were able to capitalize on and the momentum carried us throughout the game.”

The student section was pumped to support the Falcons as well.

“The atmosphere from our student section was ridiculous and really hyped us up,” Villalpando said. “Making big plays and hearing the SOF and crowd go crazy really motivated us.”

Rochester fans have taken notes on this huge accomplishment for the football team.

“I have been told several times that we came together in an amazing way to get this win,” Villalpando said. “On Stoney’s senior night it was a good way to make a statement about Rochester football.”

At the end of the day, the football program is proud to have a Falcon victory.

“I think this game shows people that we have a great group of hard working, dedicated players who never quit throughout the season,” coach Vernon said.  “Unfortunately, we had some tough injuries that worked against us this year, but to our player’s credit, they continued to work hard and they continued to get better every week. It all culminated into a big win that hopefully people in this school can be proud of.”