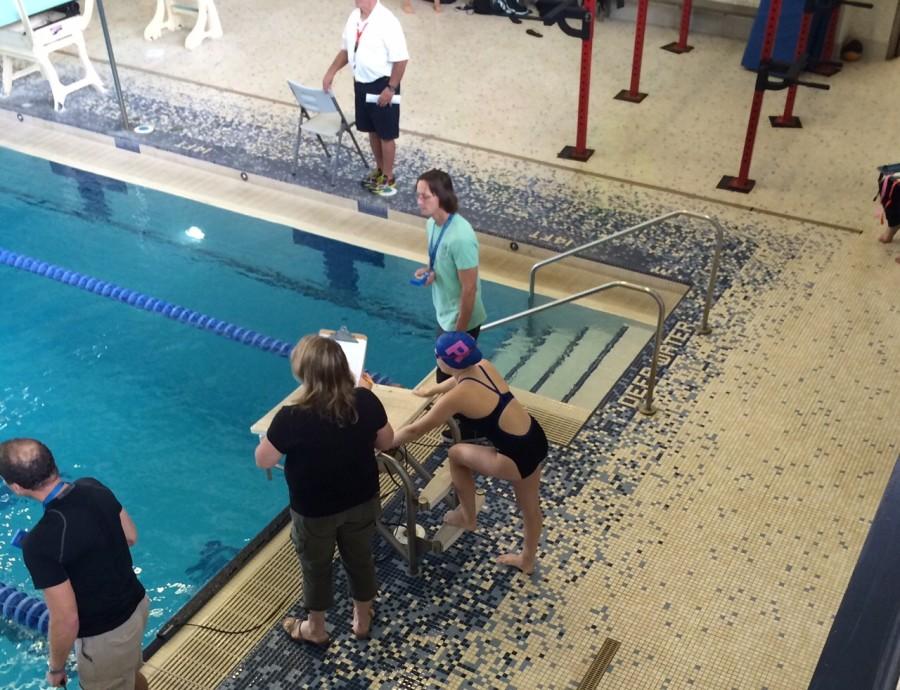 Kendall Jordan waits at the diving board in preparation for her event.

Hours before the flurries of homecoming day began, sophomore and Varsity Swimmer, Kendall Jordan, tucked her hair into a swim cap in preparations for a vital meet to her swim season. As much as she loves participating in the festivities of homecoming, Jordan values her passion as a swimmer much more, and this commitment was apparent as she and her teammates competed in a swim meet the day of their homecoming dance.

“My team prepared long and hard for this meet; we practice before and after school,” Jordan explained. “We practice 9 times a week which comes to about 17.5 hours each week. It is very tiring, but it is definitely worth it.”

On October 3rd, the team defended its strong and high-achieving reputation as it participated in a competitive meet hours before the RHS homecoming. Freshman Victoria Thor achieved the best of both worlds, as she attended both the meet and homecoming.

“Honestly there is nothing good about having such an important meet on homecoming just because we all had to rush to get ready and try our best to have our hair dry for homecoming pictures,” Thor said.

Senior Rachel Ludwig took a positive approach while reflecting on the day’s events.

“My team hoped to ultimately do nothing but improve our times and hopefully get closer to state cuts, which we did do. This meet was one more opportunity for a fast, competitive meet where you can swim against the fastest swimmers in the county, which helps improve your individual time,” Ludwig explained.

Ludwig also took the events of homecoming into consideration while reflecting on the day’s events.

“I handled the added stress as best as I could with the meet being on homecoming. I had to get myself ready without any help from professionals, but luckily my homecoming group was more relaxed about times which makes me feel better about the situation,” Ludwig said. ”Looking back, I had the best homecoming experience of all four years.”

The team’s cohesiveness was highlighted through this day as all girls lifted each other’s spirits during such a stressful event.

“My team worked together to keep focus by cheering loud for each other and having the other girls who didn’t make it to the meet cheer for us as well,” Jordan explained.

This is not Ludwig’s first time generating positive results from a meet; last year, she also was high-achieving.

“Last year at county’s I (and 3 others) were very successful, that is where we made two of our state cuts in the 200 freestyle relay and 400 freestyle relay,” Ludwig explained, “ but fortunately last year county’s was not held on the day of our homecoming.”

The unfortunate sequence of events was not any excuse for low performance, as the Falcon swimmers hoped to take down their rivals, the Highlanders.

“As a team I think that our biggest competitor was Adams High School,” Thor explained.

Victoria Thor was also proud of the way her team worked together.

“My team’s strongest characteristic is being able to work so well as a team. At the meet, people that did not swim came anyway to cheer people on, even though it was the day of homecoming. I believe that this showed that we are such a strong team and that we all care for each other very much,” Thor reflected.

Ludwig was impressed with her team’s performance and perseverance throughout the tough day.

“I think the message of part of the team swimming and the rest of the team cheering at a swim meet on the day of homecoming is that there should be no excuse to not be doing what you love, even if it means being more stressed getting ready for homecoming.”