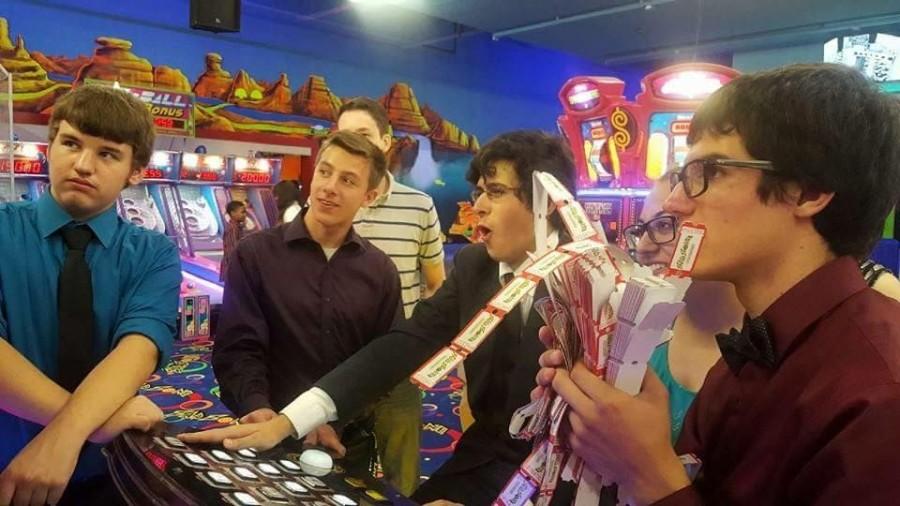 While everyone else was getting dolled up for homecoming, Reid Williams comically threw on his suit and pajamas together in preparation for laser tag. He did hang out with friends, but not at the dance.

“I like to play laser tag, and I didn’t really want to go to homecoming,” Williams said. “They were within a week of each other, so I thought, ‘let’s go laser tagging!’”

Williams has been to homecoming before, but didn’t want to attend the event this year. Just because they’re going to laser tag, doesn’t mean that they won’t look good, according to Williams.

“Although we’re not going to the dance, we’re wearing nice clothes underneath pajamas, and then wearing pajamas to laser tag,” Williams said. “It’s going to be really funny. We’re just trying to make people laugh.”

Junior Cameron Page commented on how he and his friends planned ahead the attire they would wear to the event.

“Guys will wear their dress pants, dress shirts with a tie and shoes under onesies,” Page said. “The girls will wear short dresses and pajamas so they don’t trip.”

Senior Lawrence Latouf talked about the music and dancing styles at homecoming, and why he prefers to go to laser tag.

“I find modern dancing to be fairly purposeless and the music has no real meaning,” Latouf said. “Most of the people going to laser tag have already gone to homecoming at least once, but a lot of them felt it was overrated and too boring due to the modern styles in music lacking depth in creativity, and overall lack of purpose and appeal in dancing styles.”

However, student council advisor Mrs. Kelley Cusmano had something to say about the music played at homecoming.

“There’s kids that like hip hop, so they play that. There’s kids that like rock, so I heard them play that. I think you can never get music right for a thousand people, so I think that you’re always going to run the risk of somebody saying they don’t like the DJ,” Mrs. Cusmano said. “However, I can’t please a thousand different people with a thousand different tastes in music, that all have to be appropriate, and tie it into just three hours.”

Mrs. Cusmano also commented on the dancing that takes place at homecoming.

“I think you have to be respectful [with dancing], and you have to follow decorum. You obviously have to be appropriate and respectful of that fact that other people are watching you, and that it’s a high school event,” Mrs. Cusmano said. “At the same token, I think that dancing has changed a lot in the last 50 years, so the way your parents danced isn’t necessarily the way you’re going to dance. We also don’t want this to become a footloose type of environment where we’re saying you can’t dance at all, or you can only dance a certain way, because as we all know, teenagers will go and do something else, and it could possibly be a lot worse.”

Cameron Page acknowledges the fact that people only get to attend four homecomings during their high school experience.

“I’ve gone to homecoming the past two years with my friends, and I was cool with that, but this year I figured I had already gone two years,” Page said. “People say that you only have four years to go. I wanted to try something else this time, so I figured junior year is the perfect time to take a break, and go with some of my best friends and just have fun that night, not having  to worry about dressing up as much as getting a nice suit.”

Mrs. Cusmano agrees with Page that not everyone should have to attend homecoming all four years.

“I don’t think it’s mandatory [homecoming], and I don’t think anything in high school should ever be mandatory,” Mrs. Cusmano said. “I think you share that moment with everybody, and you want to be apart of that.

Mrs. Cusmano brings up even though not everybody should feel obligated to attend, it is important to have a good turnout of people going to homecoming.

“If we don’t have enough people go, we wouldn’t have a homecoming, and people would be upset by that,” Mrs. Cusmano said. “However, there’s something called an archetype, meaning a common experience that a lot of people share. I think homecoming is a high school archetype, so whether you go, or don’t, you still classify it as something. You either remember it because you went to homecoming, or you remember it because you didn’t, and that becomes an event.”