‘Hamilton’s’ riveting presentation of history through rap is captivating 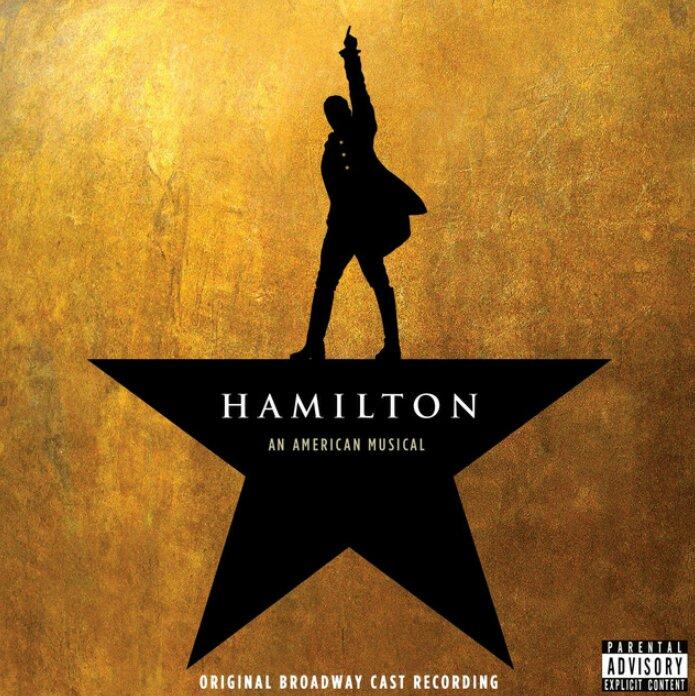 Hamilton’s recently released album’s cover depicts the founding father standing in a victorious pose, which very fitting for a musical that has been described as a victory by numerous critics.

“Hamilton,” a Broadway  musical both composed by and starring Tony-Award-winning Lin-Manuel Miranda, recently released a cast album that has been lauded by theatregoers and non-theatregoers alike. It is a rap musical which makes it very unique, and this quality has earned it much praise, although some moments or songs may be inappropriate for younger audiences. Altogether, “Hamilton,” with its catchy songs and pop culture appeal, released an amazing recording, and one that many claim will change the face of Broadway forever.

Miranda got the idea for the musical when he picked up a biography about the Founding Father’s life on vacation from performing in “In the Heights,” another show written by and staring Miranda and that was performed at RHS in 2013. He began writing songs for “Hamilton” in his distinctive style, and the White House invited him to perform the title song from the show at a literature and music festival 2009. This performance was met with a very positive response, and it moved on to being performed as a staged reading at Vassar College. It then moved to the Public Theatre as an off-Broadway production, and finally made its Broadway debut at the Richard Rogers Theatre on July 15, 2015. The cast album was just released on Friday, September 25, and the recording of the story surrounding Hamilton’s role in the American Revolution and setting up a new country, as well as his relations with others, was met with very high praise. In fact, #Hamiltunes, a hashtag used on Twitter by those listening to and enjoying the soundtrack, trended for over a day, much to Miranda’s delight.

“Hamilton” has definitely deserved such praise. The multiple talented actors, including Disney’s “Frozen’s” Jonathan Groff as King George III and Drama Desk Award-winning Renée Elise Goldsberry as Angelica Schuyler, execute Miranda’s fast-paced and high-energy style of music perfectly. The album mainly includes rap songs, but Miranda shows off his wide range of composing ability by including jazz, R&B and even classical Broadway-style tracks in his musical. These types of music fit perfectly with the story of men winning the American Revolution and establishing a new country while navigating their personal struggles at the same time, and the combination of the music and the story evokes much emotion from listeners. The personal issues that the characters relay through song are very relatable to their audience, as many people have gone through the loss of a loved one, for example, and Miranda navigates these heavy topics with immense ease and flair. The exciting and uptempo songs about the Revolution or rap battles that depict cabinet meetings keep listeners very interested in the recording, as well. Also, because the songs in the show are written this way, they appeal to a wide variety of audiences.

People who have a love for history, but do not care for overall rap style of this album, love the soundtrack, as it gives them a wider appreciation for the music style while educating and entertaining them at the same time. Those who enjoy rap, but do not care for theatre or history, also enjoy this album immensely as the catchy songs within the show are irresistible.The musical makes history accessible to a wide variety of people; they gain valuable knowledge from listening to the album and appreciate their country more because of it, while being entertained by the soundtrack at the same time.

Although this album educates, entertains and contains relatable characters and emotional experiences, it is somewhat inappropriate, especially for younger audiences. Swear words are rapped in many of the songs, and although the songs containing these words are labeled as explicit on the album, it limits younger people’s access to this work of art. These words are seemingly placed in the songs for no reason, as well, which can be frustrating to some listeners. Also, one of the major components of the second act is an affair Hamilton had and it’s severe impact on his relationships. One of the songs, entitled “Say No to This” details this encounter, and although necessary, it can make children or  younger teenagers feel uncomfortable and limit their access to and enjoyment of the musical.

Overall, this album is phenomenal; Miranda’s unique writing style shines through, exposing his audience to  valuable historical information in a fun way and the characters the songs depict are very relatable. However, the fact that it contains swear words and a bit of inappropriate material limits some listener’s enjoyment of the work. Although this is the case, the truly revolutionary musical captivates and unites audiences all over the world in a common love for the show, and the positive greatly outweighs the negative. Because of this, the cast recording gets a 4.5/5 star rating, and is highly recommended to everyone looking for a new album to fall in love with.