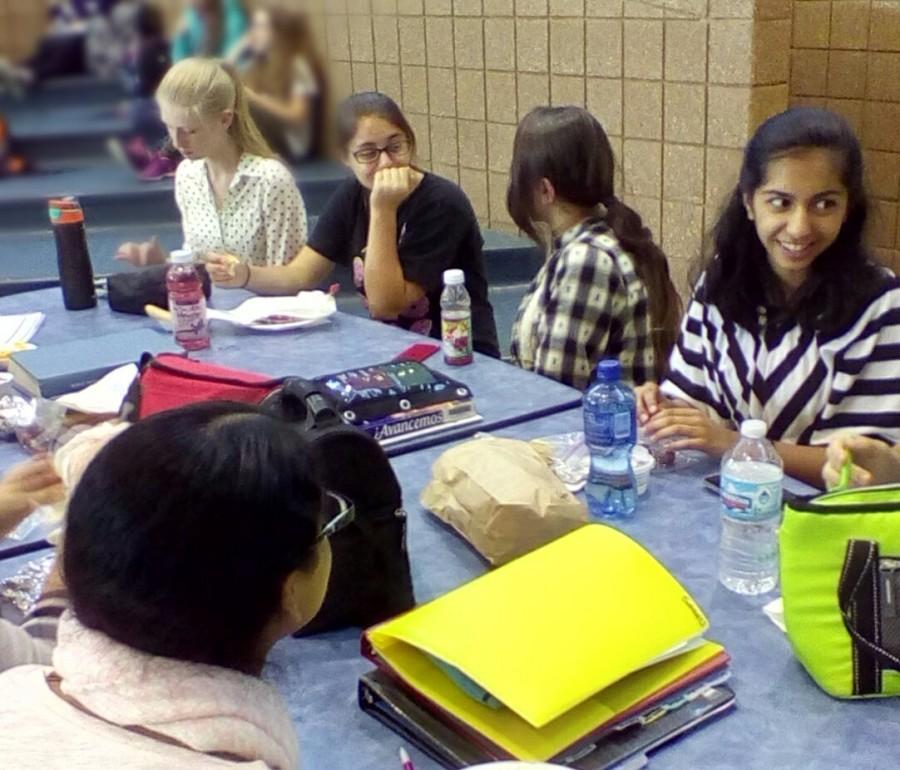 Freshmen begin to navigate the new lunch system, eating their food and talking with their friends in the cafeteria. Photo by Angela Mammel.

Rochester High School administration has recently implemented a new lunch system where instead of going to the same lunch period every day, students follow a schedule that incorporates at least two of the three lunch periods into their week. Although this new agenda disperses lunches so that no group of people is tied to a period they dislike for the year and seems to work at Adams High School, it is difficult for freshmen to adapt to, could cause many embarrassments and is very confusing. Rochester most definitely should have let their old schedule remain the same.

The new system makes the transition into high school even more difficult for freshmen. Many students were used to going to the same lunch period every day at their old schools, and the transition between this and many different lunches per week has to be very difficult. Structuring the times they go to their lockers based on the multiple lunch periods they are assigned to is especially hard for freshmen, as they are just beginning to familiarize themselves with the building. Because of this, they may have gotten lost while juggling the locations of their locker and the lunch room, combined with these new schedules. Also, groups of freshmen may sit at one table during one lunch period, only to find out that upperclassmen are sitting at that same table on another day, making the freshmen insecure and intimidated. If Rochester had stuck to its old lunch schedule, it would have made these ninth graders much more comfortable and confident in their transition between the two schools.

Much embarrassment can ensue due to the establishment of this schedule, as well. For example, students have accidentally arrived at the incorrect lunch period, mistaking it for their own, and causing them to show up grievously late to class. Although some teachers may be lenient about tardies during the first few weeks of the school year, the above scenario would interrupt a class and make a student feel humiliated. Since these new agendas frequently overlap, students also face the struggle of finding new people to sit with every day for the first week. If they can not find their friends at one of the lunch periods during the week, they may be forced to sit by themselves, which would make anyone feel incredibly self-conscious and embarrassed.

This new system is also very confusing to many pupils. Since there are five sets of fairly elaborate lunch schedules, students have the possibility of confusing the incorrect schedule as their own, throwing off their agenda for the day and puzzling them immensely. Also, many students were not aware of the switch until the first day of school, making them very confused about the schedule change and uncertain about which period to attend to comply with it. The majority of students are insecure about the start of a new school year, and the implementation of a bewildering new lunch schedule only worsens these feelings.

Many argue that the fact that the lunches are more dispersed allows no group of people to feel stuck with a singular lunch period that they highly dislike. Although this is true, this is counterproductive to the establishment of students’ daily routines. Pupils may desire to come to school and progress their way through the same schedule every day, keeping themselves  organized by doing so. The fact that they must attend two or more lunch periods every week works against them in this sense, as they must remember their lunch schedule and arrive at different periods almost daily.

Due to how it makes freshmen’s entrances into high school more difficult, could cause humiliations, and is bewildering to many students, Rochester should not have changed their lunch schedule system. If they had let their old agenda remain the same, it would make many students feel more confident about the beginning of this new school year and prevent many confusing or embarrassing situations from occurring. In order to ensure that this school is a place students can feel confident and joyful, Rochester should bring back the old lunch schedules immediately.