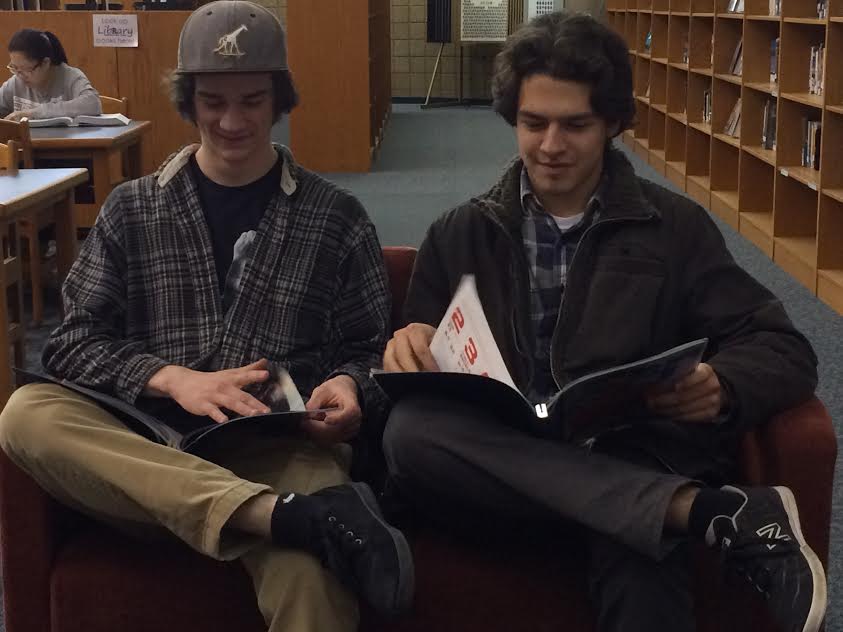 George Baseski opens a magazine and immediately puts it down. He is disgusted by what the media is promoting. This is a sign of safety from the media’s influence that causes teens to stress.

“Adolescents naturally want to fit in and be a part of the ‘norm.’ The media tells teens how they should do that,” Mrs. Healy said. “Teens are just wired to conform; the media is just a way for them to find out how.”

“When people start to cling to certain mainstream beliefs, they do it because they find comfort within themselves, so when they start to deteriorate these boundaries they are afraid to find their own identity,” Baseski said. “It makes people find refuge in themselves.”

The period of growing at this stage in a teenager’s life comes with The media uses this to their advantage as they target teens to increase their own popularity.

Junior Hannah Loveland provides her view of why teens are common victims of the media.

“Media looks towards to teens because they’re the most persuasive; they’re finding who they are,” Loveland said. “They don’t have as much responsibility as adults who have the access to changing and making decisions for themselves that kids don’t.”

Media brings attention to celebrities enticing teens to be just like them.

“They see people’s lives through a small lens on Instagram and assume that’s how everyone’s life is,” Mrs. Healy said. “Teens are more likely than adults to blindly follow trends.”

“[Celebrities] have a negative effect on teens just because of  how unrealistic it is that the everyday person who isn’t rich,who isn’t a celebrity can have all that,” Loveland said. “People who try to fit in and don’t want to be left out might turn to some of those objects.”

Conforming into a society makes it easy for teens to feel as they belong, they gain a sense of comfort knowing they are not being judged for being any different than others.

“I think it depends because there could be some media that encourages you to be yourself, but there could be media that makes fun of people for being them,” Smith said. “Everyone justs wants to belong; it’s a human response to want to be loved and accepted.”

Through childhood beliefs, many adolescents grow up knowing how others should be. The media promotes stereotypical beliefs and in the end teens are left with disappointment after the realization of reality.

“You grow up having this certain idea of what people are like and what you want in a person, and you can get let down,” Smith said. “Everyone is special in their own way, so you can’t just assume everyone would be the same.”

The media portrays an image for all teens to look up to. These unrealistic standards are the number one stressor for all teens.

Sophomore Christian Storinsky has a different take on the matter.

“It should be a goal to become successful and keep yourself healthy,” Storinsky said. “They see all their idols having a so called picture perfect life and strive to be like them.”

Stress from the media drives many teens into a variety of disorders pertaining to eating, thinking and living in general. These disorders have affected society in many ways increasing rates of depression and anxiety in teens, many leading to suicide.

“They feel that if they are not thin that they won’t be accepted,” Mrs. Healy said. “Even if the media did not exist, the pressure to be perfect would still be there.”

Loveland is quite sympathetic to the problem.

“It’s really upsetting that people have to turn themselves into who they think is perfect and it’s a big issue that they keep it a secret,” Loveland said. “Not everyone realizes how big of a deal it is because people with those types of problems keep it to themselves, but it’s a really big issue that need to be taken under control.”

Storinsky has a different mindset.

“It’s stupid that people stick to something so much that it affects their life, and that something so trivial could cause them to do that to themselves,” Storinsky said.

The absence of negative media would not be sufficient enough to abrogate the pressure of fitting in. There will always be another factor in causing stress to teens somehow.

“More teens would be more comfortable because they would see everyone else acting as the normal person would  and that would bring people to be more comfortable and confident in themselves,” Loveland said. “ They want to be happy and see all these other people be happy.”

Smith disagrees, bringing in another argument.

“It goes back to what is realistic? In certain places the Kardashians are realistic, so I think we’re always going to exaggerate things,” Smith said.

Although the media can have a negative effect, it can also be very positive. It brings communities together to connect with one another over a series of levels.

“With the whole Gage thing everyone came together, and they used social media to a great extent and spread the word, and get everyone together,” Smith said. “So I think that if it’s used in the right hands it can be an amazing thing.”

Media has advanced new ideas, connected people and has brought entertainment. Similar to many good things, it comes with a price we must pay, losing our teens to a world of internet.

“Teens need to look up from their screens and realize that there is a whole world around them that they are missing out,” Mrs. Healy said. “Teens need to understand the importance of actually connecting with one another on deeper personal level.”