Tardies in first hour continue to be problematic 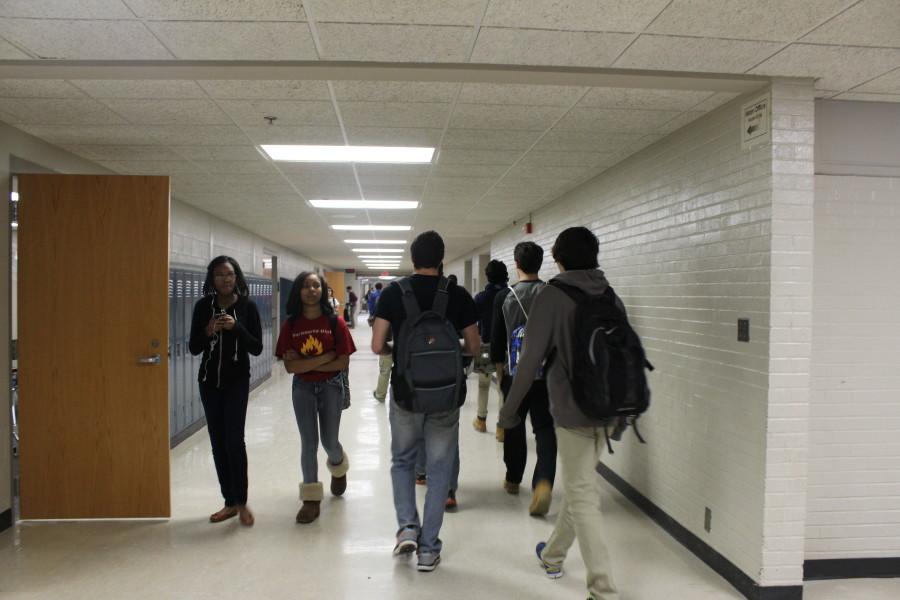 As of January 16, the end of the first semester for RCS, there were a recorded 2,385 tardies in 1st hour and an average of 1,657 tardies in the 2nd-6th hours. This drastic difference between period statistics is nothing new for RHS, as tardies in 1st hour have always been more frequent.

Interim principal Mr. Neil DeLuca thinks that these tardies can be accredited to traffic and the false security of morning announcements.

“I think a lot of it has to do with getting into school on time,” Mr. DeLuca said. “If you drive you have to deal with traffic, but mainly I think it’s the announcements being in first hour now. Kids are not going to their first hour because they know announcements are being played. They think they’re safe [with being tardy], but they’re not.”

Junior Rachel Butala feels that she has been tardy in the past due to being accustomed to the previous start time from last year, 7:35 a.m.

“I think my brain is still on the schedule from last year when it started five minutes later, so I’m wandering around and then it’s 7:28 and I have to run,” Butala said.

Butala also mentioned that the change in start time caused her to be tardy frequently at the beginning of the first semester.

“In the beginning of the year, I was late almost every day for a couple of weeks, but I’m doing better,” Butala said.

Sophomore Amy Meng believes that issues with tardies are caused by the early start time, struggles with transportation, troubling weather and distances from classes.

“It’s mostly the early start time and people who live far away have to catch buses when it’s really early in the morning so they probably can’t wake up that early,” Meng said. “It’s also hard to drive and it’s icy on the roads so people usually drive slower but they don’t take that into consideration for the time they start driving. [Another problem is] classes being far away so you have to walk a really long distance to get to the other side of the school. ”

Meng even mentioned that she had been late due to not having enough time to sleep because of the early start time.

“I was tardy in first hour but the teacher didn’t notice because it’s in band and we usually have about two minutes of prep time,” Meng said. “I was late because I woke up late. The start times aren’t fair because depending on the work that I have, I usually go to sleep around 12:30 and I get about five hours of sleep.”

Senior Trevor Noble also says that he usually isn’t penalized for being tardy because of his teacher’s leniency.

“My teacher is usually lenient about it, so sometimes he won’t mark it down,” Noble said.

Noble also says that one  main problem he sees with getting to class is crowded hallways.

“[There are] a lot of jams in the hallways depending on where you’re at,” Noble said.

Mr. DeLuca says that, even if students are tardy once in a while, it won’t affect their grade until the tardies reach a higher amount.

“The penalties are basically the RCS district guidelines which is a grade reduction after 26 tardies,” Mr. DeLuca said.

Mr. DeLuca also explained that the tardy rules have been implemented to keep students from interrupting class instruction.

“It’s obviously to keep kids in boundaries of not being tardy,” Mr. DeLuca said. “If kids were interrupting class at all hours of the day then they would be interrupting instruction and that wouldn’t be good for our school environment.”

Noble thinks that the school also has rules in place for tardies to prepare students for responsibilities outside of high school.

“It gets them ready for when they’re out of high school to be on time for their jobs or college,” Noble said.

Meng thinks that without the tardy rules, students wouldn’t care if they did not show up on time to their class.

“People usually don’t care if they’re late to first hour, so they need some kind of force to have kids come to class on time,” Meng said.

Mr. DeLuca agrees that students wouldn’t care about being late if there weren’t any implemented rules on tardiness.

“[Students] wouldn’t care,” Mr. DeLuca said. “Just like with laws on the street, if there was no speed limits, people would drive over the limit, and speeding would be more frequent. If there are not rules for tardies, people will come and go as they please. When class starts and when class ends are parameters and we keep kids in them. [If there weren’t rules for tardies] the tardies would go up, for sure. The incentive of learning wouldn’t change, students still want to learn, but they wouldn’t see any penalties for it, so if they’re five minutes late, no big deal. At least they know there’s going to be a consequence for their actions in the end [when there are rules.]”

Butala thinks that if there weren’t tardiness rules, then school wouldn’t be all that different.

Meng believes that if the amount of homework was reduced, then RHS would have less recorded tardies.

“[We should be given] less homework so that we can get to bed early and a later start time [would help],” Meng said.

Noble also thinks that the start time is problematic for students and should be changed to a later time.

“I think the start time is one of the biggest problems,” Noble said. “If we had more time and started later in the day, the kids would be a little more awake and aware of what they’re doing and being on time.”

Mr. DeLuca believes that if there was a staff driven tardy system, the number of tardies could be reduced.

“[Tardies could be reduced] by having a school wide, staff driven tardy system that would be anything that our staff comes up with because then our teachers will be buying into the same thing,” Mr. DeLuca said.

Mr. DeLuca also thinks that students can help to decrease the number of tardies by bringing the books that they need for upcoming classes with them and watching how much time they spend talking to others.

“[Students can be on time by] being punctual by going to their lockers or bringing their books for the next class, limiting conversation between friends,” Mr. DeLuca said.

Butala thinks that tardies don’t affect the time students have to learn because they usually aren’t late enough to miss key information.

“They’re not usually so late that they’ve missed half the class so I don’t think it affects them too much,” Butala said.

Noble believes that being late actually does affect what a student learns in a class but thinks that it is the duty of the student to not miss necessary instruction.

“[When students are late] they have less time to learn and sometimes the teacher’s already been teaching for a while they don’t know the material, but teachers shouldn’t wait for late students because it’s the student’s fault,” Noble said.

Butala thinks that compared to other years, there hasn’t been a huge difference in tardiness but that the tardies in previous years were slightly less frequent.

“I don’t think there’s a drastic difference but I think there were somewhat less [in the past],” Butala said.

Meng thinks that this slight increase in tardiness can be attributed to the harsh weather conditions of this year.

“There’s probably more this year because our weather is worse,” Meng said. “I think the tardiness could be resolved once the weather gets better.”

Noble thinks that grade level also has an affect on the amount of tardies.

Mr. DeLuca understands that tardy students are a natural part of a school setting and that once in a while, everyone is going to be late.

“Every school has their issues with tardies,” Mr. DeLuca said. “It’s part of the nature of a high school environment, kids are going to be late, and we get it, everyone is going to be late sometimes.”