The stars align for this perfect novel 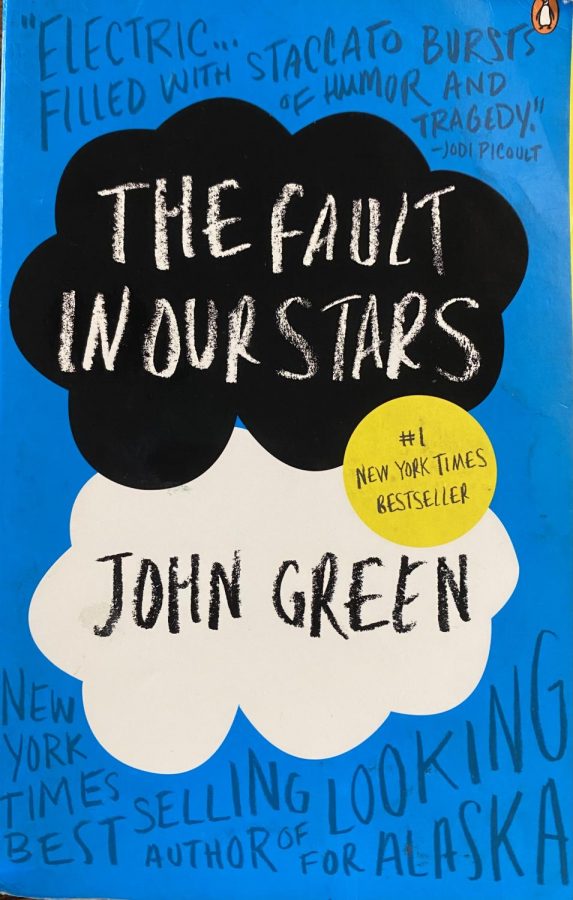 When their eyes lock, history is rewritten. A subtle smile spreads across the boy’s face as the girl stares back in disbelief. No longer is she a girl defined by her stage 4 thyroid cancer. She is a girl who will fall deeply in love.
“The Fault in our Stars,” by John Green, follows the story of two teenagers: Hazel Grace Lancaster and Agustus Waters. Hazel is not your typical sixteen-year-old. She suffers from terminal cancer that has taken over her lungs, and well, most of her life. Although she’s unable to pursue the normal kind of life most high schoolers would, she regularly attends a support group with other kids like her. It is at this support group that Hazel would cross paths with Augustus and never feel the same again.
Augustus, on the other hand, does not attend the support group because he is ill (although he did have a battle with bone cancer that resulted in losing one of his legs), but rather to accompany a friend. However, this does not stop him from making a move on Hazel.
Throughout the book, Hazel and Agustus, sometimes called Gus, bond over a book called An Imperial Affliction, that brings them on adventures of a lifetime to only fall deeper in love.
John Green’s perfectly crafted novel follows a similar fate to that of Romeo and Juliet’s; two star-crossed lovers with a fate that won’t allow them to be together forever. But even with a fatal illness, Hazel and Gus know how to make the most of their time while they still have each other.
The plot follows fast pace adventures that keep the reader hoping for a better fate. It’s filled with laughs and heartbreak, that take the reader through an emotional journey.
The story surrounds the idea that love can defy all odds. It’s clear that Hazel and Agustus can still love each other despite knowing their fate. The book takes us through the feelings of love and the pain it can cause as well. Hazel, knowing her illness is fatal, is dismissive of falling for Gus because she knows it will only leave him hurting in the end. But Gus’s wise words let us know that, “Oh, I wouldn’t mind, Hazel Grace. It would be a privilege to have my heart broken by you.” John Green’s word choice here tells us to not worry about what the future holds, to just embrace all the moments right in front of us.
Although Hazel and Gus may just be fictional characters, John Green does a fantastic job of depicting them as real teenagers. Their words, their actions, and their emotions, bring them to life. In one particular way, their characters were able to become real…
Shortly after the roaring success of the novel, a movie adaptation was filmed the following year. Shailene Woodley, starring as Hazel, and Ansel Elgort as Gus, fill their character’s shoes in just the right way.
The movie follows the plot of the book extremely well, only cutting out minor details. Some of the best chapters of the book were represented perfectly in the movie, just as the reader had imagined it to play out. Most movie adaptations of books cut out large chunks of the book to fit the time constraints of a movie, but “The Fault in our Stars” movie captured it all and will leave you just as emotional as the book did.
Both the book and the movie encapsulate young love in a subtle but accurate way. Neither character may not know what it’s like to feel that way, but they embrace all the feelings of falling in love for the first time. The book represents this nicely through language and imagery while the movie is able to show their feelings directly through facial expressions and actions. From the depictions of being glued to the phone, waiting for a text back, to a playful and sarcastic sense of humor, it’s clear they’re into each other.
The end of the book and movie leaves the reader wondering what it truly means to be alive. It keeps us pondering how we can spend every day living with purpose without worrying too much about the future.
As a heart-wrenching novel packed with hope, pain, and a whole lot of emotion, The Fault in our Stars is a young adult must-read.