Mr. Gollon takes on the classroom, the stage 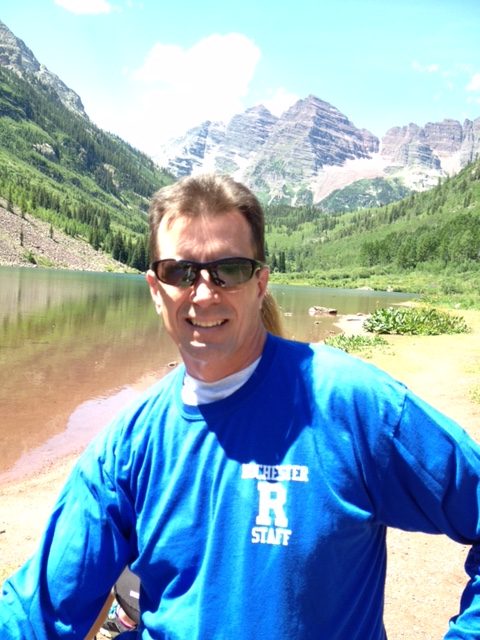 In high school, his favorite place to be was the Theatre, where he worked on almost every production during his time there, and his name can still be found at Southfield High School’s Theatre – painted on the wall backstage.
Mr. Gollon, Rochester’s own Theatre expert, was born in Inkster, Michigan, and moved to Southfield in kindergarten. He went to St. Michael Elementary School and then public school until senior year. At Southfield High School, he ran track, joined theatre as a techie, and was part of the marching band, playing the flute and piccolo. During his senior year, he was a Drum Major and joined the swim team.
After graduating high school, he attended Oakland University as a Psychology major, but changed to English after his first year. He then went to Wayne State and Boston University for a masters degree.
“I always enjoyed literature and I had great instructors in high school and college. It was at the end of my student teaching at Pontiac Northern when I realized that I was making the right career choice,” Gollon said.
Mr. Gollon noted that his favorite memories are seeing so many talented students, who had no idea what they were capable of, come through Rochester, and then continuing to see them on professional stages, on TV and in movies.
When he is not teaching, he loves the outdoors and playing hockey.

A Step Inside RHS
In January of 1983, Mr. Gollon took his first steps inside Rochester High School.
It all started when he subbed for a teacher, Ms. Wermuth, who valued his attention to detail and would request for him whenever she was out. After his first day at RHS, he immediately knew this was where he wanted to be. It didn’t take long for good words to spread around the building, and Mr. Gollon was working almost daily in the school district, but mostly at RHS. Ultimately, he received a long-term sub position, and he volunteered to assist the Theatre director at the time, Don May, and he has enjoyed his time in the auditorium ever since.
“The entire staff and administration was incredibly welcoming and supportive. This was not the case in other buildings. It may sound cliché’, but it truly felt like ‘home,’” Mr. Gollon said.
After spending two years as a substitute teacher, he realized his comfort at a high school setting was higher than any other place. He passed his National Board Certification in 2019, joining Mr. Campbell as the only other RHS teacher with that distinction.

On the Stage
Mr. Gollon’s involvement in theatre started in 6th grade, with his first show being “Oliver.” His involvment has also spanned to Southfield #10 Elementary school, Southfield High School, Oakland University, Pontiac Northern High School, Ridgedale Players Community Theatre, St. Dunstan’s Community Theatre, Rochester High School, and Summer Music Theatre.
He was initially more interested in the technical aspects and worked with lights during productions, but Mr. Gollon took some acting courses in college and performed in “The Rivals,” a Restoration comedy.
While at Rochester, he started helping out with tech for the school and the Summer Music Theatre. However, after the theatre director at the time announced that he was done directing shows, the seniors begged Mr. Gollon to step in as their new director in order to not miss out on their next musical. He agreed and took over, although he had never directed a show before.
“Closing night, as I cried with the seniors, I knew I had found my ‘Happy Place.’ The rest is history,” Gollon said.
Now, he successfully directs the Rochester Alliance of Theatrical Students, also known as RATS, at Rochester High School.
“Mr. Gollon is a very passionate man who will do anything for his production company. There were a lot of times this year where it looked like we wouldn’t get to have a show, but Gollon kept persevering just in an effort to give students the opportunity to do something they enjoyed. I don’t know how he did it, but he put on a show while working around COVID restrictions. We’re very lucky to have a guy like him leading our theatrical endeavors,” Junior Liam Clymer said.