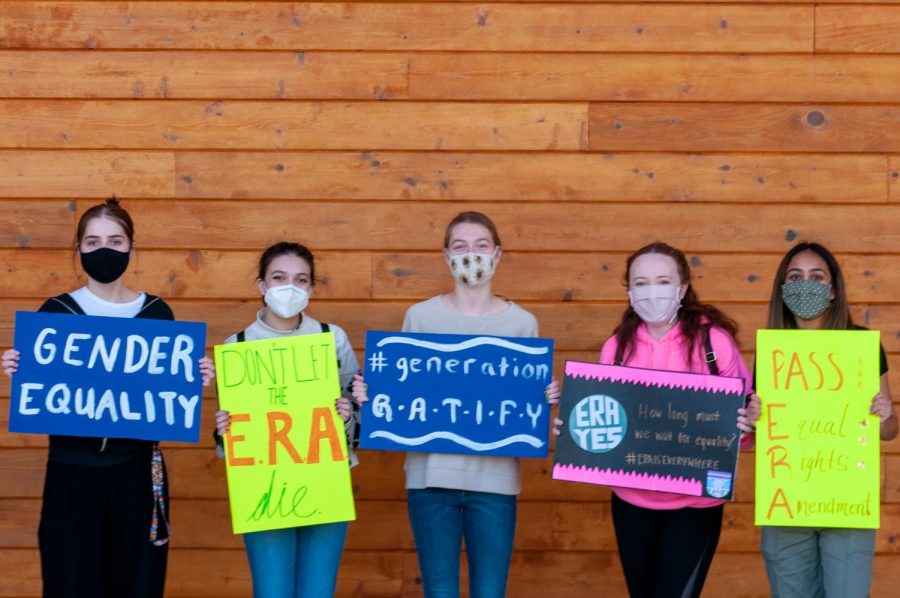 Young citizens from all around the country have been getting involved in politics by way of Direct Action events and active advocation for the Equal Rights Amendment (ERA) through the organization Generation Ratify. The organization advocates for the ratification of the ERA and gender equality legislation, and has been heavily influenced by members of the Rochester Community.

e International Academy have joined and become leaders of Generation Ratify. Shah and Gupta both hold positions as Michigan State Directors as of this year, a position that was previously left unfilled and neglected within the state.
“Generation Ratify is the youth-led movement to ratify the Equal Rights Amendment and advance gender equality in the United States of America,” Shah said. “Our mission is to build a coalition of young people across the country leading an intersectional feminist revolution that empowers and advocates for the full equality of young women, non-conforming, non-binary, femme, and Queer folx.”

All across the country, Generation Ratify held direct action events over the weekend of March 20. These events were in response to recent developments on the bill H.J. Res 17, which was recently passed in the House of Representatives and would remove the deadline on ratifying the Equal Rights Amendment.
“Generation Ratify held the direct actions to call upon our senators and not only hold them accountable but also encourage them to be vocal about their support for the Equal Rights Amendmen

t,” Shah said.
Shah and Gupta took great pride in organizing this event, and encouraged members of the community to come together and vocalize their views.

The event began in the Rochester Municipal Park with a crash course instruction on the ERA, as well as speeches from the leading members. Following this, about 35 volunteers marched through Downtown Rochester with signs advocating for the ERA and passage of S.J Res 1 in the Senate. Additionally, they put up flyers encouraging Michigan residents to contact their legislators and stand with their cause.

The organization has received participation from all over Oakland county, with eight total partners contributing to the event. One of which being Dylan Morris, the chairman of the Oxford High School Democrats, who has also partnered with Generation Ratify to show support for S.J Res 1.
“I joined because I understand that one sex—male or female—can not make change alone,” Morris said, “We have to be unified in our endeavors to make society equitable and impartial for everyone.”

Members of The Oxford High School Democrats got to express their activism for a cause they care about, all the while meeting new people and learning more about equal rights.
“As a partner of this event, The Oxford High School Democrats learned about women’s rights in terms of employment, divorce, and property,” Morris said, “It was truly an eye-opening experience for our members.”
Overall, the event ran seamlessly and shows how big of an impact young people can have on the world, Shah said.
“We were so honored to get to lead this march and appreciated everyone that showed out in support of such an important cause,” Shah said. “It was so amazing to see people of all ages getting involved in such an important and intersectional movement.”