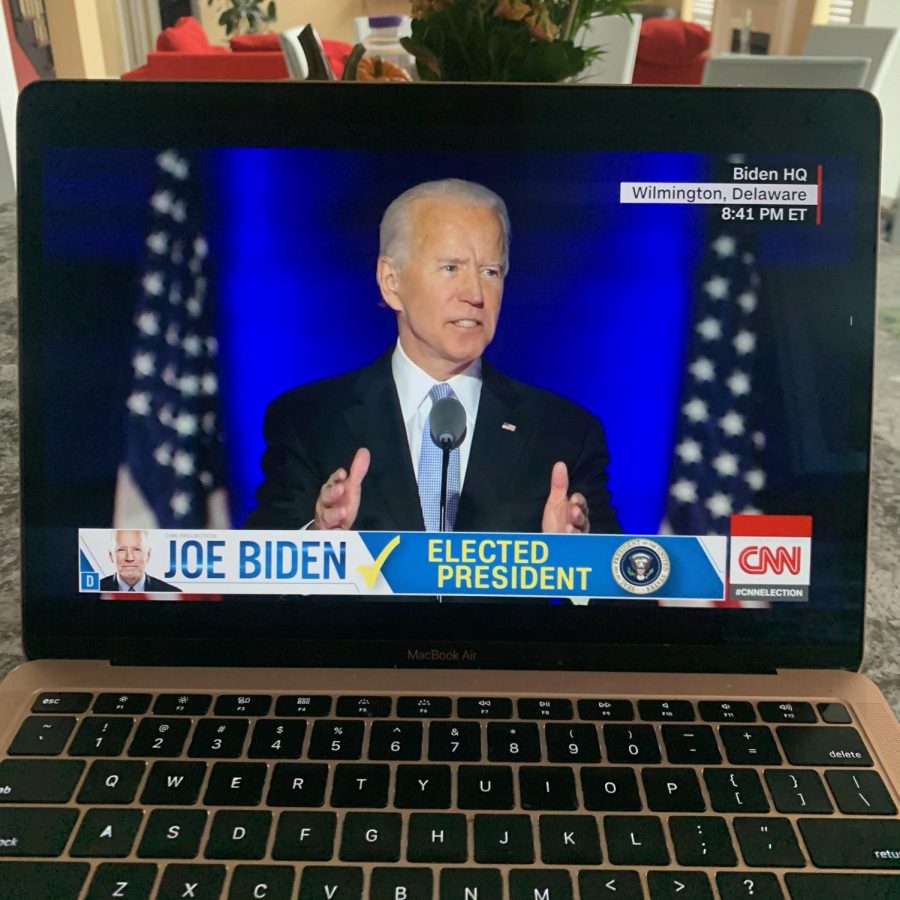 From Tuesday, Nov. 3 through that Saturday morning, millions of Americans had their eyes glued to their television screens, waiting for the media to project a winner of the historic 2020 presidential election. On the morning of Saturday, Nov. 7, many media outlets projected that former Vice President (VP) Joseph Biden had won the presidency and Senator Kamala Harris the vice presidency.

Results have not been made official by the government, but based on the results given to news outlets by all 50 states, they have presumed that former VP Biden reached 270 electoral votes. President Donald Trump has yet to concede, fighting against these results with lawsuits and allegations of voter fraud.

Crucial states to watch in this race were Pennsylvania, Georgia, Michigan, Nevada, Arizona, Wisconsin, North Carolina, and Florida as they were all swing states, meaning their results could go either way. Both candidates made great efforts to campaign in these states in order to secure their votes, and their results were rather close. Florida was called for President Trump, and North Carolina is leaning in his favor as the votes get counted. Georgia is the only other state left uncalled, but it is leaning blue. The rest of the states were called for projected President-Elect Biden. His biggest projected win is Pennsylvania; with 20 electoral votes, his presumptive victory there caused an abundance of news outlets, including CNN, NBC, and Fox, to project him the winner.

After being projected the 46th president of the United States with 290 electoral votes and over 74 million votes, projected President-Elect Biden gave a speech to the American people, emphasizing unity and recovery.

“I pledge to be a president who seeks not to divide but unify,” he said. “Who doesn’t see red states and blue states, only sees the United States. And work with all my heart with the confidence of the whole people, to win the confidence of all of you. And for that is what America I believe is about. It’s about people. And that’s what our administration will be all about.”

Prior to his speech, projected VP-Elect Kamala Harris spoke. As the first woman to hold this position, as well as the first Black person, she talked directly to all the little kids listening at home, reminding them they can do whatever they put their minds to.

“But while I may be the first woman in this office, I will not be the last, because every little girl watching tonight sees that this is a country of possibilities,” she said. “And to the children of our country, regardless of your gender, our country has sent you a clear message: Dream with ambition, lead with conviction, and see yourselves in a way that others may not, simply because they’ve never seen it before, but know that we will applaud you every step of the way.”

“…What I must admit has surprised me, tonight we’re seeing all over this nation, all cities in all parts of the country, indeed across the world, an outpouring of joy, of hope of renewed faith in tomorrow, bring a better day,” Biden mentioned.

This year, the presidential election took place during a global pandemic, creating unique circumstances and a spike in mail-in ballots and early voting. It is estimated that a whopping 65 million mail-in ballots were returned compared to around 33 million in 2016.

President Trump has been vocal regarding his projected loss, claiming that he is the true winner of this election. So far, he and his administration have filed over a dozen lawsuits against states including Pennsylvania, Michigan, Nevada, and Georgia. The team alleges that voter fraud, mainly due to mail-in ballots and the lack of Republican count watchers, occurred, and once a recount takes place, the election will sway in President Trump’s favor.

“Everyone is asking why the recent presidential polls were so inaccurate when it came to me. Because they are fake, just like much of the Lamestream Media!” President Trump tweeted on Wednesday, Nov. 11, following a tweet made the day before reading “We will win!” in all caps.

The Electoral College is set to meet on Dec. 14 to cast their official votes for president. By then, each state has to have certified its results. The votes made by electors next month will simply finalize the election, not alter the results.

This election year has been one heck of a journey, but it is not anywhere near over. Chances are, many Americans will remain at the edge of their seats until inauguration day, waiting to see what will happen next.