The figure behind the press

Mr. Tom Campbell, the printer our stories, shares his own story. 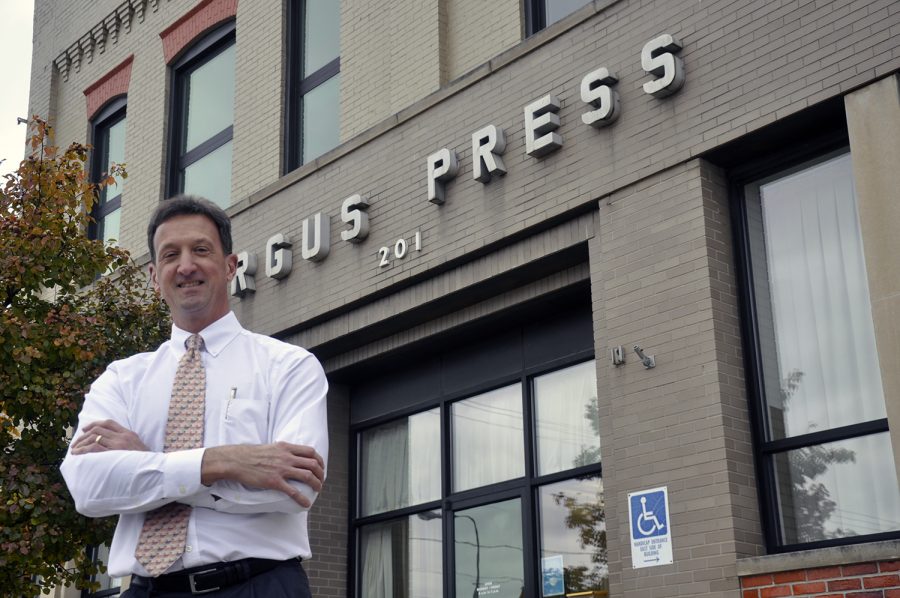 Hot off the press, packaged, sealed, and shipped with care. Hundreds of copies of newspapers are printed and sold each month by our student led newspaper, “The Talon.”

For the past twelve years, “The Talon” has had the same printer who has made this possible, and his name is Mr. Tom Campbell. He is an owner of the Argus-Press, a family-owned newspaper established in 1854.

After generations of passing down the family business, Mr. Campbell and the Argus-Press still print daily newspapers and are one of the last family-owned, independent newspapers to remain in the country.

“My family has owned The Argus-Press since 1895, starting with my great grandfather,” Mr. Campbell said. “He had three sons, two of which joined the business. One of them was my grandfather, the other my great uncle. As those men retired, their sons took over. One was my father and the other was his first cousin. Later, I became an owner after I started working here full time.”

Working at the Argus-Press has been a consistent part of Mr. Campbell’s life. From working there as a college student to becoming an owner today, he has been able to experience many of the jobs it takes to run a family business.

“I started working at The Argus-Press in the summer of 1979, which was my freshman summer after my first year of college at The University of Michigan in Ann Arbor,” Mr. Campbell said. “I started in the mailroom, working part-time for a gentleman who still works here and still runs the mailroom. I also worked in the advertising department and the bookkeeping department. My side of the family was responsible for the business operation, so I attended business school at the U of M and became the company’s business manager after I graduated in 1982.”

Not only does the Campbell family have the history of their printing business to share, but also a story of love that took place at the Argus-Press.

As the pandemic swept across America, small businesses, including the Argus-Press, had to adapt and make changes to adjust to changing circumstances.

“When the state started shutting everything down, we quickly realized that, although we were considered an essential business, practically all of our advertising revenue was going away,” Mr. Campbell said. “ We were forced to reduce our staff by about a third and also reduce the number of pages we print each week by about half. Almost all of our employees found themselves taking on new responsibilities as the work that had been done by those who were laid off had to be reallocated to those who were still here.”

In the beginning, making this shift was not easy for Mr. Campbell or his employees. However, he and his staff have had a change of heart, adjusting to new roles, and filling in empty shoes.

“Most of our employees had to learn some new skills,” Mr. Campbell said. “There’s always that resistance at first as people dive into the unknown. Now, looking back, we have only returned one employee who had been laid off.  Everyone else has become more productive.

After all these months, we’re well into new routines and there’s a lot less stress.”

As schools begin to reopen, newspaper programs offered have become limited for a variety of reasons. But even bigger, is the decline in sales Mr. Campbell’s business has had to face.

“So far this year, we are running at about 40% of last year’s printing revenue from school newspapers,” Mr. Campbell said. “I expect that number to be even lower by the end of the calendar year, as most schools will not be printing their larger Christmas season issues.”

Not only has there been a decline in sales, but many newspaper programs are no longer offered in schools which is a growing challenge the Argus-Press has had to face.

“We’ve also seen a number of newspaper programs at schools be discontinued. Several advisers retired over the summer and the schools have chosen not to continue on with the newspaper class,” Mr. Campbell said. “However, I am optimistic for a school newspaper resurgence when the coronavirus is eventually managed and schools can get back to teaching regularly in person.”

The Argus-Press prints physical newspapers seven days a week along with publishing on their website. Although a digital era is more prevalent than ever, the Argus-Press wants to print newspapers for as long as they can.

“The physical newspaper has always been our first priority,” Mr. Campbell said. “I hope it will be for many years to come. Our business model would not survive in an online-only environment. During the past several months, our readership, both in print and online, did very well. The pandemic made people more interested in local events and developments, but it did not really change the way our readers preferred to engage with us.”

No matter how tough the challenge may be, Mr. Campbell and the employees of the Argus-Press show resiliency and show up to complete their job every day in order to serve the public.

“ The news media and particularly electronic media has shown a constant stream of death and destruction from Covid-19,” Mr. Campbell said. “In my opinion, there’s another side of the story, involving people that have stepped up to the challenge and go to work every day and take responsibility for keeping their local communities moving forward. Here in Owosso, the employees of The Argus-Press are doing exactly that. Certainly, we had apprehension in the earliest days of the pandemic. But, our employees have faced the challenge with courage and resiliency. We stay safe, but we do our jobs and serve our customers every day.”