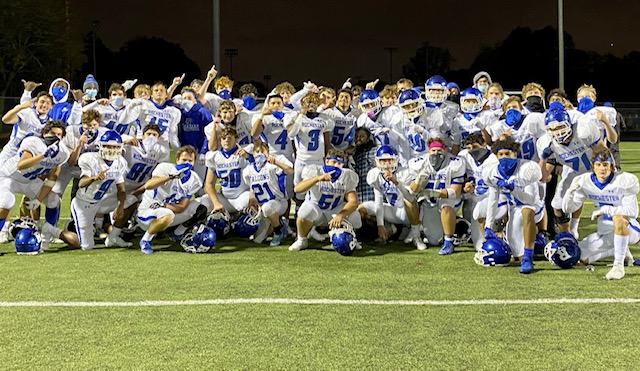 The Falcon offense was led by sophomore quarterback Alex Bueno, who threw for three touchdown passes, along with running backs Jeff Hawkins, and Andrew Koss, who both had a great night rushing, with each of them running in for a touchdown. Berkeley jumped out to an early 7-0 lead, however, the Falcon defense was dominant after that, as they kept the Berkeley offense scoreless for the rest of the game.

The Falcon defense practiced hard all week, and worked hard to learn Berkeley’s play style, which was key in securing the win.

“The defense practiced against Berkely’s offense, and we knew what plays they were going to run,” Senior Paul Batt said.

This was the biggest challenge of the year for the Falcon team and they were able to truly prove themselves as a dominant force.

“This win was our first challenge,” Batt said. “After Berkely scored first we took it as a challenge, and made sure they were scoreless the rest of the game.”

The team has been working hard all season to capture the label of “undefeated.”

“It means a lot to us that we are undefeated,” Batt said. “The whole team has been putting in the work all season long, and going one hundred percent every day.”

The Falcons are now moving on to the playoffs, where they will be taking on their cross town rival, Adams High School, in the first game. A win against Adams would be a big achievement for this Falcon team, as Rochester hasn’t beaten the Highlanders since the 1996 season.

“It would be huge to win. To remain undefeated, and to beat Adams is the goal,” Batt said.

The Falcons will be playing their first game of the playoffs at home, against the Highlanders of Adams High School tonight at 7 p.m.