LoveFest: “Battle of the Sexes”

This February, RHS took "Battle of the Sexes" to the Mid-Michigan Theatre Arts Festival 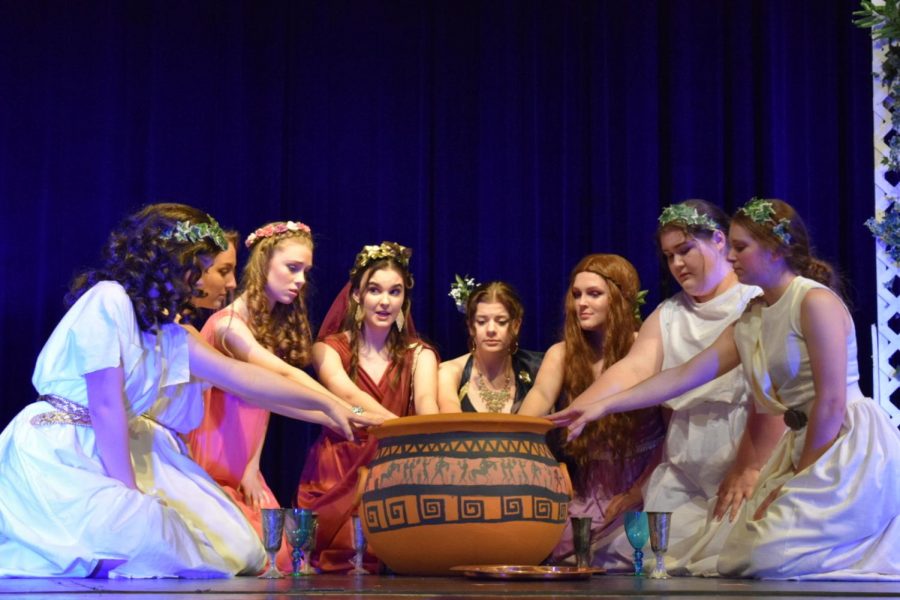 “It’s called LoveFest truly because of the love we share for each other and for theatre,” senior Anna Konno said. “It’s an incredible experience for any theatre kid. I chose to follow my passion for theatre and major in Acting at Oakland University, because of my experience with RATS and this festival. It’s a life changing experience.”

Anna Konno, along with other members of Rochester Alliance of Theatre Students (RATS), attended the Mid-Michigan Theatre Arts Festival at Garber High School in Essexville, MI on Jan. 31 and Feb. 1.

The Mid-Michigan Theatre Arts Festival, dubbed LoveFest, is an annual festival hosted by Garber High School to celebrate various one acts from across the state. 14 high schools present shows each year, running about every 75 minutes. Each show has close to 45 minutes to perform and is alloted time for set-up and tear-down.

This year marked the 25th anniversary of LoveFest and the 23rd year of Rochester High School’s participation in the festival.

The spirit of the festival is to celebrate the work done by each student and school as a whole in a collaborative effort to promote the love of theatre arts.

“The entire concept of the festival is based on a non-competitive environment,” Mr. Gollon, english/theatre teacher and theatre director at RHS said. “Each performance is adjudicated by a college theatre professor, this year from Saginaw Valley State University. The adjudicators award acting and technical awards to each performance.”

This non-competitive and celebratory spirit allows students to relax and have fun with students from other schools.

“I held up a shirt with Tom Cruise on it and got multiple kids from other schools to shout Tom Cruise,” senior Joe Kocenda said when asked about his favorite memories from LoveFest 2020.

Each student had a unique experience, but all were very positive.

“The entire summer creating this [one act] with Anna [was my favorite part of this process],” senior Mackenzie Lovell said. “It was so much fun to come up with ideas for this and dream about what it could look like one day. Seeing it performed at Lovefest. That’s when it really set in that this all was real, that I hadn’t dreamed all of this, our passion project was coming to life.”

Seniors Mackenzie Lovell and Anna Konno planned and adapted the one act from a play entitled “Lysistrata.” The pair spent 84 days over the summer of 2019 accomplishing this daunting task.

had seen Oakland University’s production of Lysistrata and wondered if they could do an adaptation,” Mr. Gollon said. “They spent the summer creating their own version and developing the entire design of the show. After review and consultation it was approved by the administration for performance.”

Lovell handled the technical aspects of the show while Konno did most of the rewriting, but they both collaborated on each part and worked out any problems that they encountered and attempting to keep the spirit of the original play.

“The original Lysistrata contains some very mature content, so the challenging part was adapting it for a high school setting while still keeping the overall tones, premise, and comedic aspects intact, while also modernizing it and making it youthful and interesting for younger audiences,” Konno said.

This process was not an easy one, taking Lovell and Konno an entire summer to complete.

“The entire summer we worried if we’d be able to pull this off or if we’d do all this hard work and we wouldn’t be able to do the show,” Lovell said. “We didn’t care about all the work because it was fun to us- this really was our passion project. We just really wanted to be able to showcase all of this hard work we had put into this project.”

Over time, the show came together and wove strong feminist plot lines with humor and epic battle scenes. Konno and Lovell knew that it was crucial to the integrity of the original play to include themes of feminism and the battle over the assumption that women are the lesser sex.

“What I hope students took away from this show is that this story doesn’t look too different than what our society looks like today,” Lovell said. “We’re still fighting for social change and for peace- not much has changed since this was written in 411 BC- I hope they became self aware of that after watching this. It’s a political piece about women coming together to Ironically- battle for peace. They’re not just fighting for peace-there’s an element of fighting for respect and equality.”

This idea came to life through the cast and set design process. Paul Konno, Anna’s father, designed the original sketches and Lovell adapted them to fit the show as it evolved. The stage managers, Evan Hayen; Brendan Eaton; and Chuck Perry, consulted on set design.

The show exceeded expectations thanks to the joint effort put forth by all members and crews that worked on the show.

“I’m really proud of how this show turned out, and it wouldn’t have been possible without all the students (cast and crew) involved in this process,” Konno commented.