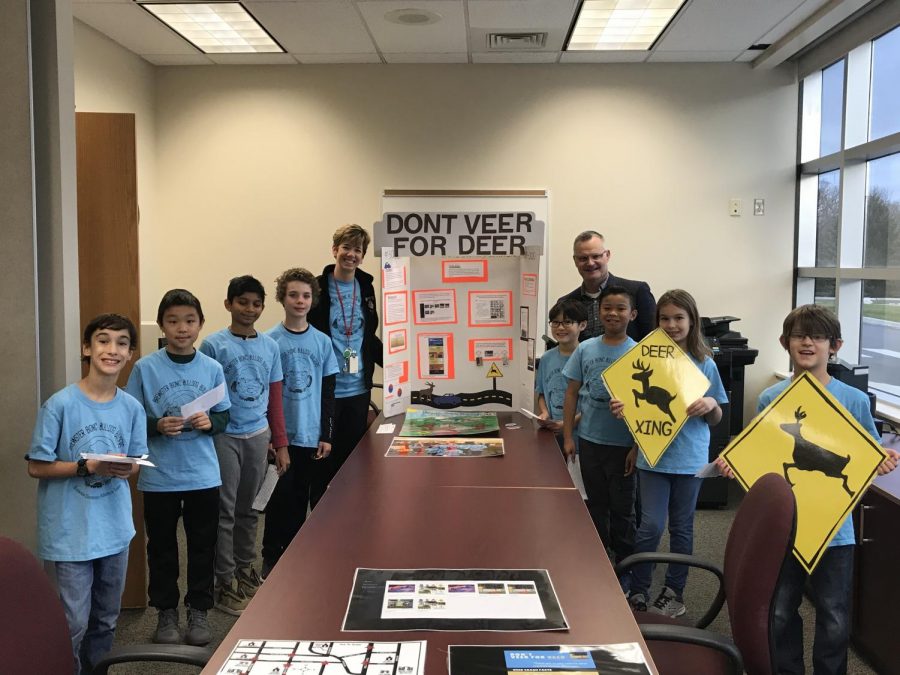 One Tuesday afternoon, I was on my way home from school when I noticed a block in the road. After turning left onto John R., all the cars on the road were at a dead stop. Slowly, the cars started moving again, and when I got towards the source of the problem I realized what was happening: A woman had hit and killed a deer. Her car was very damaged and had left debris all over the road. Cars were trying to work their way around the bloody deer, the large chunks of debris left in the road, and the woman’s car.

These harsh drops are not only due to hunting, but also to clash of urban and rural environments; this results in deer-vehicle collisions that impact both those in the car and the deer population. The deer make their way onto busy country roads and highways, then jump out to surprise people who are simply just getting where they need to go.

This trend is not true for the city of Rochester Hills. Rochester faces vast deer overpopulation problems according to Mayor Bryan Barnett.

“We do have an overpopulation of deer. There is no doubt … We spend a lot of time on this. We are constantly being alerted to articles around the country, to new processes and approaches across the country,” he told the Rochester Post.

This puts not only the life of the deer in danger, but also those in the vehicle. According to the Michigan State Police, 50,000 people each year are involved in deer related car crashes throughout the state. Of this amount, 80 percent of these crashes occur at night.

The deer problem in Rochester Hills has impacted the lives of those who inhabit the area. Rochester High School’s most beloved Mrs. Rosell has had a particularly interesting encounter with a deer. She was on her way to work another day here at RHS when she saw something in the corner of her eye. A deer was running full speed towards the passenger side of her car. The deer ended up denting the side of her car, nearly ripping off her passenger side mirror, and leaving shards of antler embedded in the car. Mrs. Rosell made it out unharmed, but the deer wasn’t so lucky.

“I didn’t hit the deer, the deer hit me!” Mrs. Rosell said. Her story places an emphasis on the severity of the issue. Thankfully, Mrs. Rosell did not veer, and thus there were no injuries to herself or others.

Rochester Hills has some of the highest rates of deer-vehicle collisions in Michigan, with Oakland county being 5th in the state. Oakland country had 166 deer-related crashes in 2017, three of which resulted in injuries. Knowing that deer crashes in the area are quite common, what are some ways to avoid a collision?

The first way to avoid a deer collision is by remaining alert, sober, and focused when driving. This is the best way to ensure you do not miss any deer crash warning signs, and that you know when deer are approaching your vehicle.

In addition to this, deer are more active at night. This means from dusk to dawn it is especially important to be aware of your surroundings. Also, deer are present year round, but tend to come out more during the spring and fall; thus, you should be more cautious during these seasons. Another important thing to note is that deer typically travel in groups, and move in lines. So if you see a deer run across the road, know that there are likely more following it.

You should always try to avoid getting in a situation where you could hit a deer, but if the crash in unavoidable, there are some things to keep in mind. The most important thing to do is to continue driving straight. You may have heard of the phrase “don’t veer for deer.” Well, it is used for a reason. If you swerve to avoid a collision you put yourself and others at a greater risk for injuries and fatalities. The correct thing to do is to maintain control of the wheel, break firmly, and come to a controlled stop. This is the method to ensure those in the vehicle, and all surrounding vehicles, remain safe.

The deer crisis in Rochester Hills is one caused by a variety of sources. The combination of the overpopulation within the area in addition to lack of education on what to do when encountering a deer, has created a substantial issue within our city.

“For our research we also interviewed Rochester Hills Mayor Barnett and City Natural Resource Manager Matt Einheuser,” Mrs. Sears said. “We then presented our Solution and Project to Dr. Shaner and the City of Rochester Hills Natural Resource Manager Matt Einheuser- Mayor Barnett was supposed to be there too, but had a death in the family.”

“The board was very supportive of the students and appreciated their feedback,” Mrs. Sears said.

All of the elementary students present at the meeting were reported to have had an amazing experience with the Superintendent and Resource manager.

Dr. Shaner was very supportive of the robotics group and talked to them about working on social media outreach, Mrs. Sears said

The team conducted research about how the “Don’t Veer for Deer Campaign” is only targeted at older groups, and how there is a lack of education regarding this campaign towards young drivers. After looking into the problem further, they concluded that there is a hole in the City of Rochester Hills’ education plan for the “Don’t Veer for Deer Campaign.”

“They found that the City of Rochester Hills does nothing to educate teenage drivers” said Mrs. Sears. Meaning most young drivers in Michigan are unaware of roads that have higher likelihood of deer collisions.

Some Roads in Rochester Hills have a higher likelihood of deer crashes. Avon Road, Adams Road, Walton, and Tienken are all hot spots. However, the issue is that most young drivers are unaware of these facts, which puts them at a greater danger of getting in a crash.

The Deer Management Committee was created by the city in 2009 in an attempt to solve these issues. The committee conducts annual deer recounts, and makes suggestions about how to solve the overpopulation problem in Rochester Hills. $10,400 is given to the committee each year for many purposes. For example, throughout Rochester, the city has placed electronic signs saying “High Deer Crash Area, Use Caution”; these signs warn drivers when they are entering an area with a high likelihood of deer crossings.

The committee also takes measures to make the population aware of the issue. This is done by publishing informational material in order to keep citizens up to date, and also organizing deer gardening programs.

However, these measures are not seen as enough in the eyes of the students. They want to give this message to younger drivers in any way they can.

“The next step that we are taking because the drivers training groups are privately owned we are working with them to get some more information out,” Mrs. Sears said. Additionally, the kids want to write a letter to the state to get in touch with the driver education companies and continue to work with the city on getting more information out.

One way the Robotics team has worked to get more information out is via social media. The group created an Instagram account in an attempt to spread awareness, and the handle is @bionic.bulldogs.

“You’ve got to remember that these are 4th and 5th graders!” Mrs. Sears said, astounded by their accomplishments and level of outreach.

Overall, movement is being made to solve the deer problem in Rochester Hills by incredibly young and progressive groups. The “Don’t Veer for Campaign” will hopefully continue to be advertised and practiced within the city, in addition to proper deer safety etiquette.