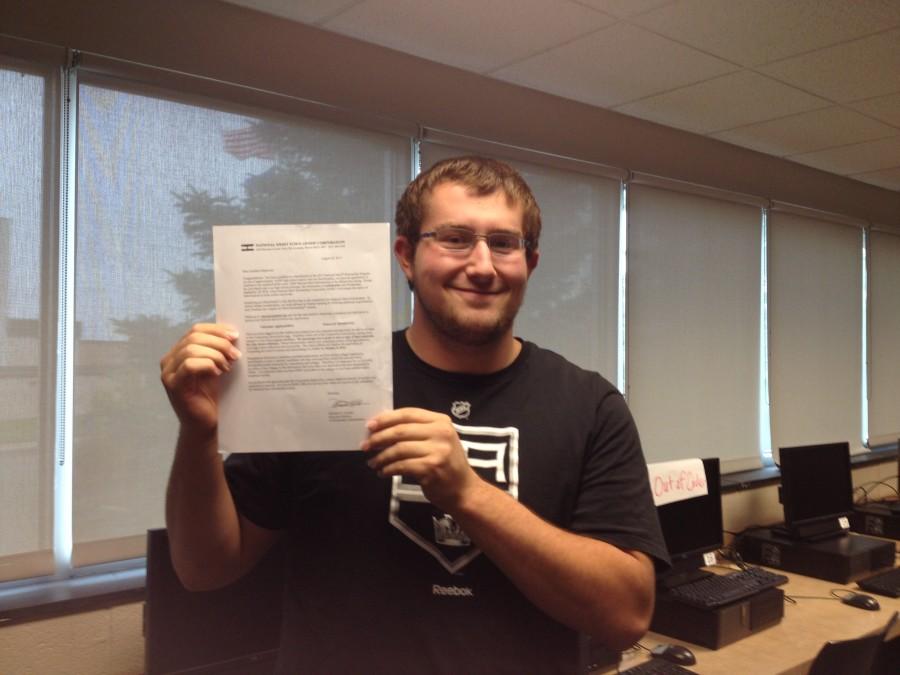 Markwort stands with the letter he received from the National Merit Scholarship Association.

Every Fall, the National Merit Scholarship Association selects roughly 16,000  students from high schools around the country as National Merit Scholar semi-finalists. RHS senior Jonathon Markwort is one of these top ranked students. Principal Mr. Charles Rowland could not be more impressed.

“I just think it’s a heck of an honor for any student to be recognized by the National Merit Scholarship competition, because it’s not easy,” Mr. Rowland said. “It’s very lofty criteria that you have to meet in order to even be considered, so congrats to Jonathon. He’s done an awesome job.”

The results regarding semi-finalists recently came out at the end of September, and certain requirements must be met before the finalists are determined.

“With Jonathon, I called him down and I personally congratulated him and I gave him his letter that I received,” Mr. Rowland said. “There are some things that he has to do online to complete the process so that he can be eligible for the scholarships and there’s a component for me, there’s a component for the counselor, all of which have to be completed and submitted online.”

The National Merit Scholarship Corporation recognizes students with outstanding academic achievement over the course of their high school career and offers scholarships to those who excel.

“[Jonathon] is a semi-finalist, so he’s in the running to be a finalist, and he is going to be eligible for some pretty substantial scholarships that we hope that he gets,” Mr. Rowland said. “As soon as we find out how he fares in the next stage of the competition we will definitely share that because we are proud of Jonathon and of what he’s doing and how far he’s gotten already.”

According to Mr. Rowland, Jonathon’s achievement positively reflects and represents not only RHS, but the entire Rochester Community Schools district.

“In my mind, it recognizes that Rochester, as well as Rochester Adams and Rochester Stoney Creek has students that are just achieving at such high levels that we really need to be proud of the students and what they’ve accomplished,” Mr. Rowland said. “We have some outstanding students that really are doing some great things in and outside of the classroom.”