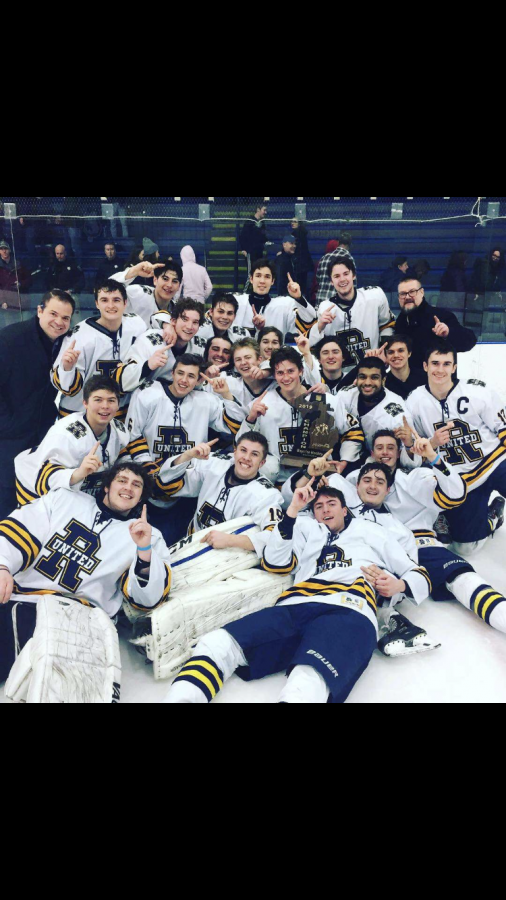 Rochester United hockey made history this season as they went undefeated in the OAA for the first time, which resulted in the team winning the league and the region. Rochester finished the regular season 22-3, and went on to win the regional game and go to the state semifinals in the playoffs.

“[Winning leagues was] A great accomplishment. [I am] so proud of the young men on the team to come together with achieving their goal of being league champions this year,” Varsity coach Bryan Kowalski said. “Going undefeated  for the first time in league play is a very special accolade.”

According to Coach Kowalski, experience and depth played a big role in the team’s success this season.

“Our main strength is our depth. We have a large group of Seniors, 13 total, in addition to our very talented underclassmen,” Coach Kowalski said. “Everyone on the team has contributed.  It is not a one or two line team. We’ve had production top to bottom with the roster and are very fortunate to have a healthy team.”

The team was always improving throughout the season in order to make a successful season happen.

“We have all improved in the past couple of months,” sophomore forward Justin Chevalier said. “Our team really wants to create a legacy for our schools, and that is why we are doing our best to play like never before.”

Some players believe the atmosphere around the team and the team chemistry and camaraderie contributed to this season’s  achievements.

“Creating memories is one of the most important things with any sports team,” Chevalier said. “But the way RU connects as a whole friend group is something I personally have really never been a part of.”

The team’s success did not come without struggle, however, Kowalski believes the struggle actually helped the team.

“Adversity is welcomed on this team.  It is something I have preached to the group all year,” Coach Kowalski said. “Sometimes things will not go your way, but when you are faced with adversity you can shy away or work harder.  We have been on the top of the OAA all year, we have faced many good opponents, and because we were on top, we saw every other team bring up their game to challenge us.”

Even with the struggles, Coach Kowalski says the focus and the effort was always given by the players.

“One of the best teams to be apart of, bar none,” Coach Kowalski said. “These young men show up to the rink and give me 200 percent every day. That’s all a coach can ask for.”

Although next season is far in the future, some players believe they will be able to maintain this standard of winning.

“We will have to see what happens next season,” Chevalier said. “But the coaching staff definitely is able to create a program that is able to continue doing great these next couple of years.”

Rochester United brings together Rochester and Adams players to form one team, unifying the two schools, which creates a unique experience.

“I want to thank the athletic departments of both Rochester and Adams for their support this year.  Also, the students have come and supported us throughout this journey as well,” Coach Kowalski said.  “As a combined team, it allows both schools to have a common team and I really do believe that is something special.”