Behind the scenes of the counseling office

Counselors share the many parts of their busy jobs 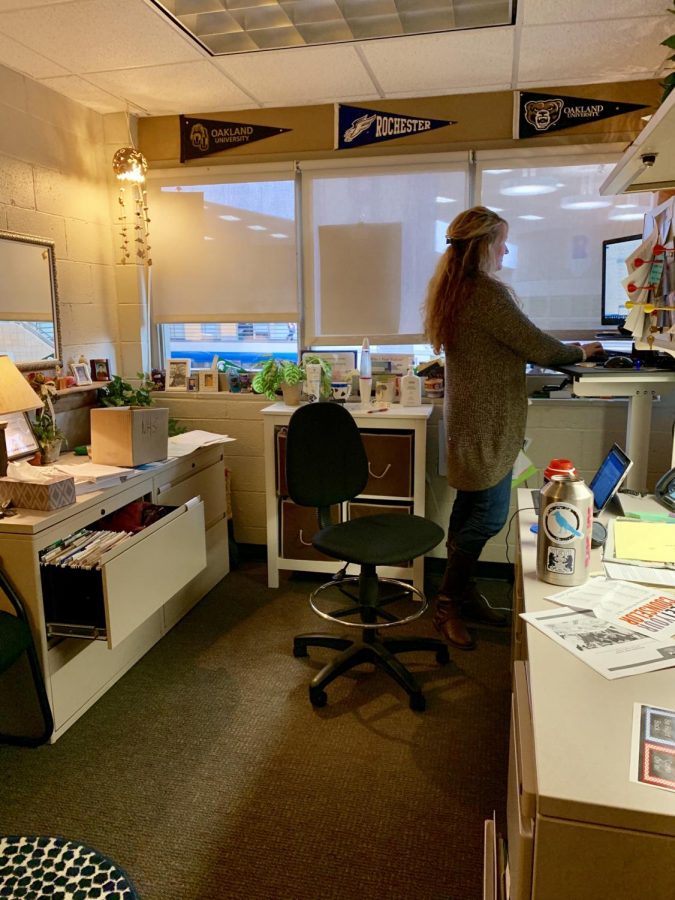 Mrs. Messing-Mirabito is very busy while working in her office. Photo by Holly McDonald.

Mrs. Jennifer O’Toole-Sekya has a long day in the counseling office. She is busy with meetings, scheduling and her many other tasks as a counselor. She is in the midst of one of the busiest times of the year.

Counselors have many tasks they must complete, including the scheduling process for next year and much more.

Counselors do much more than just schedule classes for students. Mrs. O’Toole-Sekya shares what she thinks most people overlook about counselors.

“Sometimes I don’t think people quite realize how much we do for social-emotional needs for kids,” Mrs. O’Toole-Sekya said. “That didn’t always use to be as big as it is, but that is the majority of my job at this point.”

Mrs. Laura Zotos explains this part of a counselor’s job more in-depth. She understands that not everyone faces these challenges, which is why it isn’t widely known.

“First of all, it’s private and second of all, it doesn’t affect the entire population,” Mrs. Zotos said. “A lot of times it’s confidential and private so sometimes we don’t involve administration.”

As the end of the school year approaches, the counselors have a busy job preparing seniors for their departure from RHS.

“My biggest thing is trying to build independence,” Mrs. Zotos said. “I like to encourage independence and stepping out on their own and being a leader.”

The counselors understand that preparing the seniors is an important job. Mrs. O’Toole-Sekya explains how she lost access to a program that used to be very useful in career cruising.

“I used to have access to something called Myers Briggs, which I did with some of my seniors,” Mrs. O’Toole-Sekya said. “It’s a personality inventory that relates to careers.  I just lost access to it last month, and it’s $500, so I hope to find some money to be able to get that back because I think that’s another useful career tool.”

Understanding seniors’ paths or where they want to go next can be a difficult task. Mr. Christopher Green always tries to find what interests students , before he does anything else.

“I think it’s really important to know where they want to go, Mr. Green said. “I want it to be meaningful to that person so I really work hard to try and help people find what matters to them.”

For students who aren’t planning on going to college, there are other career options that are worth considering.

“Trades are deeply in demand, which I don’t think people are considering enough,” Mrs. O’Toole-Sekya said. “I mean, electricians are going to be making some serious cash eventually where we have some people who are just going to get a degree and not know what to do.”

On the other hand, counselors also have to focus on the incoming freshmen who will be entering RHS next year.

“The first thing we do is we schedule with them,” Mr. Green said. “I think we try to mentally prepare them for that process of how everything does count now. I try to emphasize how testing becomes a much bigger part of your overall grade and studying matters.”

Mrs. Zotos has worked with counseling middle schoolers before and because of her prior experience, she enjoys working with incoming freshman.

“I was a middle school counselor for nine years,” Mrs. Zotos said. “I want them to feel comfortable reaching out to me even before they leave middle school. At our counseling office, we’re always trying to do our best to meet kids’ needs. ”

“I just want them to feel welcomed more than anything,” Mrs. O’Toole-Sekya said. “I really feel like you guys are my kids, and I love you guys. I want them to know that and to feel that.”

Although counseling is a commonly busy job, RHS counselors love what they do because they never know what the next day may bring.

“You’re always doing multiple things,” Mr. Green said. “Depending on your personality, you may like that because your job is never the same every single day.”