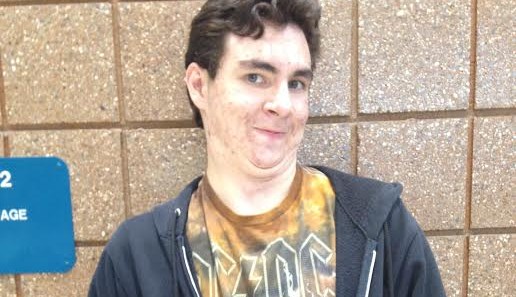 Sophomore Tyler Harper and his friends hang out on the stairs in the mall during lunch.

Sophomore Tyler Harper assumes his perch at the top of the mall stairs overlooking the lunch commotion below alongside his social group. His group wears oversized, black and grey hoodies along with light washed jeans, and their topic of discussion revolves around the latest video games.

Harper’s favorite thing about his friends is the fact that he can be himself.

“I feel like our group is more like a family,” Harper said. “We understand each other so well, and we get each other’s quirks and jokes, and it’s very comforting.”

This is one of many unique social circles at RHS.

“Generally people form their social groups by their personality, who fits best with who, what they like, and what they like to talk about,” senior Noah King said.

Harper considers the benefits of hanging out with those who share similar interests.

“The benefits of having a social group is you always have someone there for you at any given time,” Harper said. “If you have a problem, they know you best so they can help you with it.”

Although some students prefer a close-knit group, others enjoy talking to everyone and being a social butterfly.  Junior Lauren Bachman said she likes multiple groups because she has too many interests to fit in with just one.

“It gets boring sometimes because every day becomes a regular routine with the same people doing the same stuff,” Bachman said.

According to Harper, branching out of one’s social circle can be difficult.

“When students try and go outside of their social group, they are going outside of their comfort zone and most people don’t feel comfortable doing so,” Harper said. “Sometimes it’s scary for kids; it’s a new person and you don’t know what they are like.”

King agrees that, while it can be a challenge, learning how to interact with different people is a good life skill.

“It’s really hard for some people to go and meet new people, but it can be very beneficial if you do,” King said.

“I think what’s most important is that you really get to know a lot of people,” Mrs. Arcangeli said. “Some students may have a particular idea about a certain group, but when you get to know people on a certain level your whole world opens up.”

Mrs. Arcangeli has advice for people about how to become more open-minded.

“I really tell students to travel a lot, make as many friends as possible,” Mrs. Arcangeli said. “Don’t just stick with the same type of person; get to know new people. Then you will get to know yourself a lot better, too.”