How do you pass passing time? 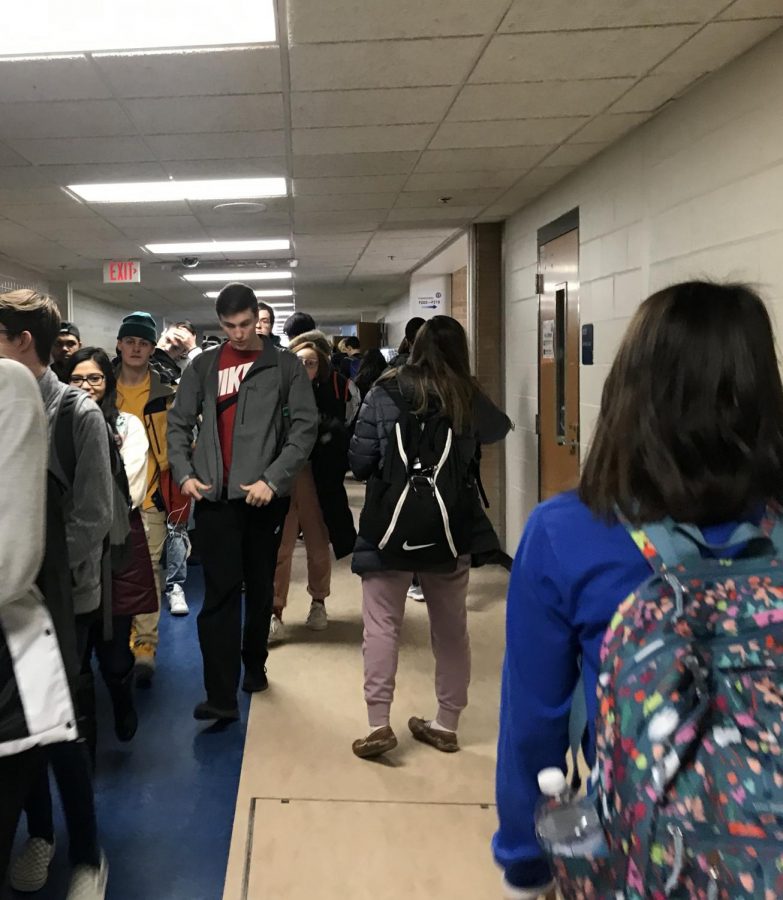 During the six minutes that elapse in between each class at Rochester High School, students have time to get to their next class and find time to get something else done on the way. The question is: what do students do during those six minutes?

The bell rings, signalling freshman Sydney Shubnell to get out of her seat and begin the journey to her next class. Although there’s not much to do during the walk, Shubnell will make use of her time.

“I usually just go straight to class and do stuff on the way,” Shubnell said.

She also utilizes her phone while she walks, for the use of entertainment. She ends up figuring out that the hallway isn’t the best place to use her phone.

“I have my airpods in, which is useful since I can keep my phone in my pocket,” Shubnell said. “Sometimes I text my friends while walking, but let’s just say it’s not a good idea. I end up running into people and tripping.”

Another way many people spend passing time is talking with friends, even if they are on the other side of the hallway.

“I usually just walk and talk with friends,” freshman Gabby Chamberlin said. “On the way, if I see any of my friends, I shout at them to say hi.”

Freshman Nicole Hubbert also takes the time she has during passing time to fill up her water bottle.

“I fill up my water bottle after a few of my classes, whenever it’s on the way,” Hubbert said. “I drink a lot of water throughout the day.”

Six minutes may be enough time to walk to class, talk with friends, and fill up a water bottle, but fitting another task in there (such as going to the bathroom) may be tough. This is why freshman Grace Agius tries to go whenever she has enough time.

“After lunch to fourth hour I usually use the bathroom because I have a lot of time,”  Agius said.

Although some students may have trouble trying to do many things over the course of one passing time, freshman Jenna Arnold thinks the time is enough.

“Six  minutes is enough,”Arnold said. “Because I just need to walk to class and accomplish that in six minutes.”

While Arnold may think six minutes is more than enough time to get to and from class, others may think it’s just barely enough.

“[Six minutes] is enough time to go straight from class to class,” said Hubbert. “But if you want to try to do anything else in between, you don’t have time.”

Chamberlin agreed with what Hubbert had to say, and said she wishes there was a little more time.

“Six minutes isn’t too little time,”said Chamberlin. “I just wish I had more so I can go back to my locker and not have to carry all my things around.”

However, the issue that affects how much time students have to get to class is the crowd. Depending on what hallway a student is going through, and how far his or her next class is, the amount of free time that’s available relies on the crowd. Many students find that the crowd proves to have a negative effect on their passing time.

“I hate the amount of crowd in the hallway,” freshman Sloane Barlow said. “It’s especially worse in the F and B hallways, and it takes me so much longer to get to class because people move like herds of cows.”

Due to slow walkers and crowds of people, Shubnell hurries out of her third hour class and down the F hallway staircase, hoping to beat the crowd and get a seat at lunch. She soon realizes that this was not one of her greatest ideas.

“Quick tip- don’t run down the staircase trying to get to lunch or class,” said Shubnell. “When I try to get to lunch, I’m always in a rush since the lunch tables fill up so fast, and I end up falling down the F hallway staircase.”

Freshman Megan Splan explains how she never has enough time to get to class, and therefore ends up running.

“All the running I do in the hallways trying to make it to class on time has made me stay fit,” Splan said.

No matter how much time there is, these students try to make the most of it, and use it purposefully. Shubnell is also one of these people.

“I feel that six minutes is enough time to get from one side of the building to the other,”  Shubnell said.  “If you want to do anything in between classes (go to the bathroom, your locker, etc.) and your classes are not close to each other or your locker is farther away, then it would be pushing it to get to class on time.”