Special needs students at RHS play in a basketball game 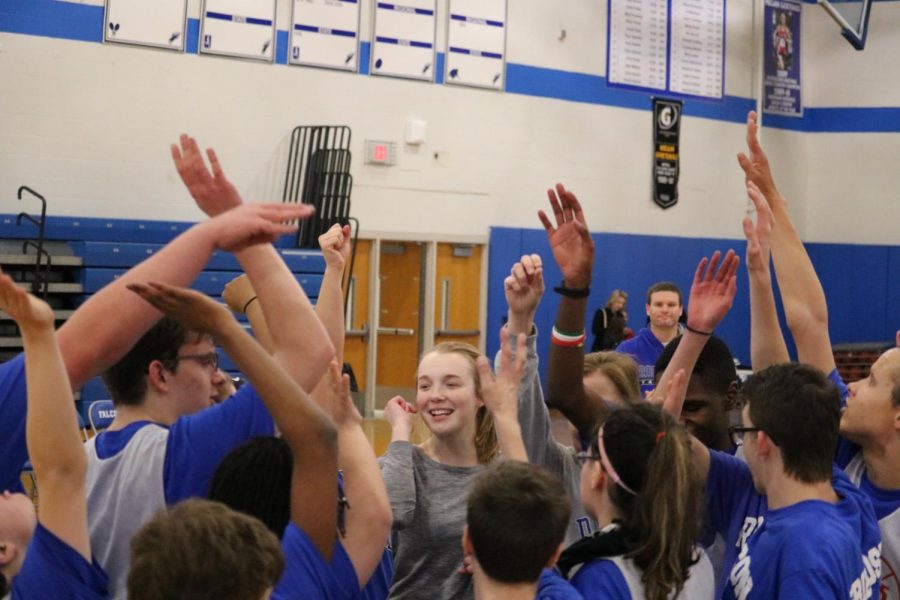 The Falcon Friendship Game gives special needs students at RHS an opportunity to play in a basketball game, while members of the community cheer them on.

“They’re always the ones watching in the gym,” special education teacher Mrs. Amy Cosentino said. “This is their opportunity for them to be out there and participate.”

On Monday, March 4, the Falcon Friendship Game will be held in the RHS main gym. A $5 donation is recommended, and the funds go to the special needs programs at RHS.

“The game was very successful last year,” junior Alicia Perkins, who helped run the game last year, said. “We had many people cheering in the bleachers and we raised over $500 for the special needs programs at RHS.”

Along with Perkins, Senior Elizabeth Bulat ran the game last year. Perkins explains how they came up with the idea for the game.

“My friend and I served at a camp called Cran Hill for a week during the summer,” Perkins said, “and that inspired us to plan the game.”

The game was successful last year, and because of this, they are able to have the game again this year.

“It was unbelievable. I could not believe we had stands packed with people and all of the cheering for our students,” Mrs. Cosentino said. “It was overwhelming with so many people who came. I anticipate this year being even bigger and better.”

The game is not only exciting for the players, but for the audience, too, according to senior Scott Russell. Viewers get to cheer on their classmates and enjoy watching the students have a special moment.

“It’s an opportunity for the kids on the court to be able to have some fun and have the chance to have their time to shine,” Russell said. “For the viewers, it’s a chance to root for your school and brings the school spirit to another level.”

While the students play, Mrs. Cosentino believes they not only have fun, but learn to believe in themselves.

“I feel that my students gain self-confidence because they’re able to play in the big gym with all the excitement,” Mrs. Cosentino said. “They love sports and they love to have activities so it’s nice that there’s something they can do in the evening.”

Rochester students who want to become involved in this event can help even in the simplest of ways.

“RHS Students can help out by coming to the event and cheering on their peers to create a fun and exciting environment,” Perkins said.

“I just like playing in the game,” Teats said. “I like being on the court and shooting.”

Junior Kanaa Alford also played in the game last year and enjoyed being able to play in the main gym with a crowd watching her.

“I like the cheerleaders,” Alford said. “It’s really nice to have them supporting you, and all of the people there helping you to be safe.”

Senior Saige Morgan not only enjoys the game, but also the process that comes with it.

“We get to have a practice before the game,” Morgan said. “It’s very fun.”

Sophomore Steven Eberline likes to be part of a team. He enjoys being on this team for a special reason.

“I’m excited to play basketball because the teammates are all your friends,” Eberline said. “You can enjoy yourself and have fun with it.”

Sophomore Tarana Qureshi is not only excited to play, but to encourage her teammates while they play, too.

“I like basketball because it’s very entertaining,” Qureshi said. “You can even motivate someone else.”

The students want to prepare before playing the game. Alford plans on eating healthy and taking a nap, while Teats also plans on practicing.

“Workout, practice and take a nap,” Teats saId. “You can practice at home if you have a basketball hoop. I try to get better and better.”

Mrs. Cosentino feels very special to be a part of this game. She knows that her students have fun while playing, and she experiences even more joy watching.

“It has really made me feel so blessed that I work at Rochester High School with such amazing students,” Mrs. Cosentino said.